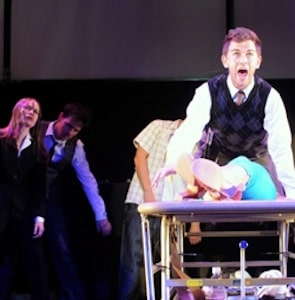 directed by
Kelly Devine
The Happy Embalmer is a delightfully mod new musical premiering during the New York Musical Theater Festival. From the moment the band plays the rock opening over title cards straight from 70s pop art, the show bounces implausibly and comically along, barely pausing to catch its breath.

Since this show is part of the Festival, it is still a work in progress, coming together for the first time, but it is a great ride to be on. The Happy Embalmer is the story of a gloomy embalmer, working in the family mortuary making the dead look great for their viewing. Upon seeing his true love wheeled in (dead in an accident) he discovers a new talent for reincarnating the dead. But this is no Pushing Daisies-style rosy retread. The embalmer quickly finds himself on the run from those that want to abduct him and profit from his talent, a multinational mortuary firm headed by a crazed Texan, his old Russian professor-cum-mentor, now raising the dead in tropical Iceland and the Dali Lama, pushing his own new branding scheme.
It is a fun and frenetic evening, grounded in some great (and some throwaway) tunes provided by the authors of the book, music and lyrics, Mark Noonan and Nick Oddy. These two are lucky enough to have gathered some amazing talent on both sides of the curtain, including director-choreographer Kelly Devine, who choreographed Rock of Ages last season. Ms. Devine keeps the energy (and the people) moving constantly. On a Broadway stage, this might be too much, but in the minimal confines of Festival, it works very well.

On stage, the cast consists of amazing voices. Daniel Reichard (the title role in Candide at New York City Opera) plays Edward the Embalmer with a rich voice ready for a full work out. Megan Silora plays his true love Emily and works the stage as is worthy of this Broadway semi-veteran. One stumbling block might have been the rather gloomy demeanor of Edward during the first half of the play. Edward is a subdued, diminutive man a little lost until the intermission. But instead of working against the show, the rest of the cast shines brightly.

The cast takes full advantage of their time in the spotlight. John Jeffery Martin stars as Todd, both the minion of the crazy Russian scientist and the protector of Edward and Emily. He is known as the-exceptionally-good-looking Todd, and plays the role with a steely anti-camp demeanorthat makes him a camp classic character. Cedric Lelba, Jr. plays Tenzing, a martial arts monk working for the Dalai Lama and is a great foil for Edward, Emily and Todd. In fact, all the major players stand out in this production.

The Happy Embalmer was a treat to watch, a bit like an Austin Powers movie without Austin and his annoying Yeah, baby!” It is a trip I would gladly take again.