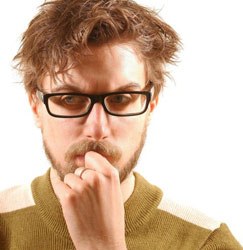 It’s one of the hottest days of the year and a rather pink-faced and sweaty crowd are watching Simon Munnery perform a set in front of a selection of Roman urns.

We are in the Museum of London’s Roman Kitchen section. Somewhere else in the building Richard Herring (and his moustache) is also performing in front of assorted bits and pieces from London’s past.

This was the last in an occasional series of unusual comedy gigs appropriately titled Laugher in Odd Places.
Set up in 2006 by Terry Saunders (one of the participants in the recent Twitter Comedy experiment) and Tom Searle as a way of livening up the room-above-a-pub rut of the comedy circuit, their first odd place was a library in Camberwell and they’ve since arranged gigs in a second-hand bookshop, a laundrette, a record shop, Hampstead Heath, and in comedy critic Bruce Dessau’s living room.

While most of these were, by necessity, small events (the bookshop gig played to an audience of just 20), their summer shows in the Museum of London were far bigger and more ambitious, with impressively large and varied line-ups and an atmosphere akin to that of a mini-festival. Last year Stewart Lee and Richard Herring played in different parts of the museum while Luke Wright discoursed on a poet’s work in front of those same Roman urns.

This year, if one were so minded, one could begin the evening by seeing Will Adamsdale (he of Jackson’s Way and The Human Computer) and his regular collaborator Chris Branch sing Snow Patrol songs and describe encounters with annoying small children on the underground and accidental mobile phone calls. Adamsdale’s brand of comedy is one of character and narrative rather than joke-led stand-up yet it adapted well to the unusual set-up.

Following this, one could then move inside the museum proper to see the up-and-coming Sara Pascoe perform an energetic, barefoot set while sporting a big plastic ‘bling-ring’ which had apparently been bought by her dad in the Museum gift shop.

While she flirts with bad taste material in a sort-of-Sarah-Silverman-alike manner, she’s smart and engaging and copes well with the noise of someone else’s better amplified set in another part of the building (the main drawback of the night was the way in which one act did sometimes drown out another, what with the building not really being acoustically engineered for the hosting of multiple comedy gigs).

If you’d stayed put after Pascoe’s set you could then have seen Munnery perform a characteristically dry half hour that somehow encompassed random dog attacks and testicular cancer and yet was still very, very funny.

You could have done all these things or, because of the pleasingly pick-and-mix quality of the event, you could have a different night entirely: elsewhere, in different bits of the museum, Richard Herring was performing, Terry Saunders was telling stories, Tim Key was reading poetry and Hoi Polloi’s Hugh Hughes was being Welsh. This meant there were some difficult choices to make as it was obviously impossible to see everyone on the bill, but the picking and choosing and the later note-exchanging was all part of the fun.

This was the last Odd Places show as Saunders and Searle have decided to wrap things up. The first Museum of London gig in 2007 attracted roughly 400 people, there were over 800 there last year and this year there were, well, um, lots: it was very busy. A rather big number, I think. One can understand why they’d want to finish things now, on an undoubted high. The gigs were free and while they were driven by word-of-mouth, they were never cliquey. It was a great idea, well-executed, and one that had far more going for it than just the novelty factor. It’s a shame that it’s over (and that we weren’t smart enough or quick enough to make it to the Dessau living room gig), but all good things, as they say, must come to an end – and it was a very good thing while it lasted.