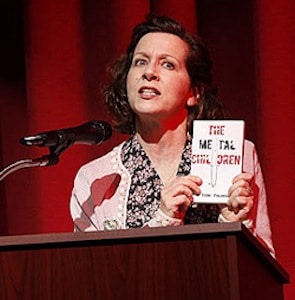 directed by
Adam Rapp
Adam Rapp’s voice as a playwright is stamped all over almost every line of his latest play, The Metal Children, now playing off-Broadway at the Vineyard Theatre. Of course, Rapp could hardly be called a master of subtlety. His plays are riddled with violence and sex, chock full of the kinds of shocking moments on which so-called “edgy” playwrights thrive.

This latest play is about Tobin Falmouth, a young adult novelist whose first book, The Metal Children is causing a stir in a small community in the American heartland. The book, which chronicles a group of girls who get pregnant and suddenly start to disappear, has been banned by the district’s school board, and Tobin, egged on by his gay editor Bruno (the excellent David Greenspan), has come to the small town to testify on the behalf of his book before the school board.
Upon his arrival, Tobin, still reeling from his separation from his wife, who’s left him for her own editor, finds himself feeling more alone than ever. Confronted by admirers like local teacher Stacey Kinsella and hotel proprietress Edith Dundee, he finds himself tempted by Edith’s young niece Vera (Phoebe Strole), a student at the school in question, who, inspired by the heroine of Falmouth’s novel, is beginning a movement amongst her friends that eerily mirrors the events of the book.

Rapp’s play is full of surprises, and Billy Crudup gives a compelling performance as haggard Tobin, our tired but determined hero whose ethical crises are the primary subject of the play. Unfortunately, by the beginning of the play’s disappointing second act, the piece as a whole begins to feel more like a school board debate than a compelling drama.

Most of the characters speak with an unlikely degree of fervent intellectualism, and those who don’t are so clearly puppets for Rapp’s personal viewpoints that the small-town setting of the play begins to feel more like an excuse for the playwright to put across sophomoric, slovenly-drawn portraits of backwards yokels rather than flawed, complete humans that challenge our ways of thinking.

As the play progresses, it strays further and further away from the sense of realism established by the play’s early scenes. Unfortunately, Rapp’s idea of theatrical flights of fancy too often relies on tricksy grandstanding and immature, incomplete storytelling rather than attempting truly dangerous innovation. The play raises compelling issues about censorship, an artist’s responsibility for his creations, and also religion, but its tone and its approach negates even its best intentions.

Watching The Metal Children, one can almost imagine the playwright, who’s gone through similar experiences as a writer for young adults, in the back of a rowdy classroom, pointing and laughing at those with whom he disagrees rather than chronicling their stories. Perhaps his blinders are on. It’s easy to skim the surface, to write characters whose viewpoints are easy to pinpoint rather than elusively complex, and unfortunately Rapp takes this path of least resistance, reaping few rewards.