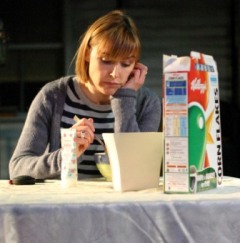 Just because something’s small doesn’t mean it can’t be beautiful.

Or experimental, or poignant or thought provoking.

For proof of this, look to the Miniaturists, a regularly staged event that celebrates the possibilities of the short play.

Curated by the playwright Stephen Sharkey, each Miniaturists programme consists of five short works from writers both new and established.
The plays are fully staged costumes, lights, sound: the lot rather than simply rehearsed readings and they are also fully formed, complete pieces, rather than fragments of some larger work.

The plays feel whole and lack the work-in-progress feel that is inherent in scratch performances. The format also allows for pieces to be commissioned, developed and staged in a relatively short space of time.

The Miniaturists began life at the Southwark Playhouse (back in November 2005) but soon moved to their current home at east London’s Arcola Theatre. They’ve now notched up 18 such shows.

The bill for the most recent Miniaturists consisted of six, rather than the usual five, pieces, all playing out against the backdrop of the Arcola’s current show The Water’s Edge.

First up was Adam Brace’s Dart Fired, a short comic piece about a local television reporter (played by Katie Cotterell) who is about to do her first national broadcast – about a stray cow. She’s freezing cold, desperate for a wee and the slightly unnerving Network Rail man keeps reminding her of their past sexual encounter. It’s a tightly written and funny scene that squeezes a lot from its set up.

This was followed by Louise Monagahan’s Sports Day, a duologue about two mothers, friends since school, one ultra competitive, the other not so much. The play neatly captures the complexity of friendships, especially those that stem from childhood, and was well played by Lu Corfield and Holly Atkins; but of all the pieces felt the most like a rough draft that would benefit from further development.

Of the pre-interval trio of plays, the most exciting was Helen Smith’s Purple, Silver, Orange, Olive a kind of breakfast table Blade Runner. A couple are bickering over their morning cornflakes: the woman once wanted a romantic man who would write her poetry and be considerate of her needs, but now she has him, she finds the reality rather grating. He is too literal, she complains, and not what she envisaged when she placed her order, but then an inspector arrives and threatens to separate them – which makes her reconsider. The play had a pleasing absurdist quality and the writing was deliciously playful, cramming an abundance of ideas into a few minutes.

The second set of three began with Laura Fitzgerald’s The Last Room I Checked, a play about a troubled and angry young girl who was watched over by three, well, I’m not quite sure family ghosts, future selves, guardian angels? It was well acted – particularly by Tilly Oakshott as the young girl, Zoe – and very atmospheric but ultimately a tad impenetrable.

The most experimental play of the evening was Fourteen Mouthfuls of Air written and directed by Rod Smith. After an amusing and extended set up in which props were moved into place and described, a series of short scene played out using only a handful of words. Though the dialogue did not make sense in a conventional manner, a definite narrative was played out and it was entirely possible to project a story onto these scenes (just as it was with Anne Washburn’s The Internationalist, a play in which large chunks of dialogue consisted of a made up foreign language). As an exercise, it was intriguing, though it felt oddly disconnected, almost like two separate pieces, perhaps because the strange array of props from the opening sequence were not used in any satisfying or meaningful way.

The final piece of the evening was Joy Wilkinson’s The Sunnyhill Sweepstake a cracking monologue about teachers and the gamble of the school system, with the passing of time marked by Whitney Huston songs. Sharply written, it was very different in tone from Wilkinson’s full length plays Fair and Felt Effects and while the concept was perhaps a little too neat, it was very well executed and endearingly performed by Anthony Shuster; a fantastic way to round things up.

No play lasted longer than twenty minutes so if one piece wasn’t quite to your taste it wasn’t long before something else took its place. The calibre of performance was very high throughout, especially given the little rehearsal time involved, and though there were inevitable trip ups (once literally), they were very smoothly handled by the actors.

As a forum for writers to push themselves to new places, the Miniaturists is ideal, and from the audience’s perspective it makes for an exciting and memorably different theatre experience.