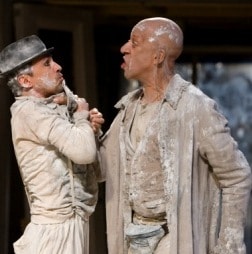 directed by
Helena Kaut-Howson
At the heart of one man’s comedy is, often, another man’s tragedy.

This was certainly the case for Molire at the time he wrote The Miser.

Having experienced nationwide praise and regal advocacy for his early works, Molire’s life took a turn for the worse.

Growing religious opposition, disappointing new work that Molire himself rejected, the death of a child, marital problems and steadily declining health all dogged the French playwright towards the end of his life, but Molire was still able to conjure a farcical comedy.
It seems paradoxical that Molire was able to extricate himself from the surrounding chaos in this way. But that would be to presume The Miser is a straightforward comedy, or even a straightforward farce. As tonight’s performance unfurls, and its undercurrent themes become disquieting modern-day truths, it becomes clear that The Miser is every bit as tragic as it is satirically comic. Three hundred years after this play was written and amid its sharp witticism, playful asides to the audience, amusing family melodrama and slapstick horseplay it is the lustful greed and me-before-anything single-mindedness and obsessiveness of Harpagon that still strikes the loudest chord.

Molire played Harpagon for the first few performances of The Miser. Battling a chronic cough and gait, the playwright’s portrayal of the crotchety old man that puts his own greed before the happiness of his children bore the essence of commedia dell’arte. And it is this improvisational philosophy that underpins director, Helena Kaut-Howson’s interpretation of the 1668 satire. The largely young cast does feel like an authentic troupe, with energy levels consistently high and a youthful semi-improvised sense of chaos reigning for the majority of the performance.

Derek Griffiths’ characterisation of Herpagan is tremendous. At times, the former Play School-er barks insolent commands to his servants and disobedient offspring with the all the reptilian snarl of the evil Emperor Palpatine character from Star Wars. At other times he limps pathetically around the stage like the decrepit Simpsons character, Montgomery Burns. It’s a memorable portrayal that even allows Griffiths to playfully pick on members of the audience, but always manages to steer clear of pantomime villain territory.

Griffiths is aided and abetted by a cast of largely young, up and coming talent. Danny Lee Wynter is particularly impressive as Clante, Herpagon’s lovesick son. Bearing an uncanny resemblance to Johnny Depp’s Edward Scissorhands, albeit with hair arranged in scissor-like 45 degree angle spikes, Wynter’s acerbic rows with his father are convincingly ill-tempered and desperate. Simon Gregor’s conniving La Fleche character is the night’s most energetic performers and spends the duration of the show leaping around like an amphetamised sprite.

Charlie Walker-Wise is also convincing as the dashing Valre character that makes the fatal mistake of pursuing Herpagon’s daughter. The two female love interests are stunning, thanks largely to their cinma du look retro-future clash costumes and makeup. (The production’s designers clearly owe a lot to Luc Besson). And it is this quirky stylistic clash that helps to give what could have been a fairly stale and traditional interpretation a contemporary makeover.

As the production gradually descends to its farcical “I am your father” finale, so the crowd warms more to it. The intensity of the first half, which raises a few half chuckles, is nicely balanced by the second half’s regular guffaw outbursts. But this is an effective performance of a play that leaves as many unsettling thoughts as it does happy memories. Under its comic surface is a grim exposition of the human condition.