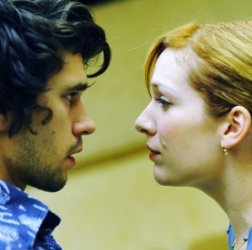 We’re not quite sure how this happened surely it has only just stopped being summer? but, no, apparently it’s the middle of December, which means it’s roughly the right time for musicOMH to produce its obligatory end-of-year list.

Having consulted the core team of OMH reviewers and bickered about it for a bit, we have come up with a highly arbitrary Top Ten of Stuff We Liked This Year.
There are, inevitably, some interesting omissions. Two of the year’s biggest event’ productions didn’t quite make the grade despite the calibre of talent involved. Despite the exciting pairing of Ian McKellen and Patrick Stewart, Sean Mathias’ Waiting for Godot at the Theatre Royal Haymarket was a bit too slick and fond of itself for our liking, though McKellen was excellent as ever.

And The Habit of Art at the National, otherwise known as The New Alan Bennett’ (with compulsory fanfare) was a play one could appreciate intellectually, but its self-interrogatory quality ended up undermining its overall impact.

Other things we were quite keen on that didn’t quite make the cut include Alexi Kaye Campbell’s second play, Apologia, at the Bush Theatre; Architecting at the Barbican, a complex and many layered co-production by TEAM and the National Theatre of Scotland; Alia Bano’s debut play Shades at the Royal Court; Steve Waters’ thought-provoking climate change double-bill The Contingency Plan, also at the Bush; Adam Brace’s Stovepipe, a promenade production at the West 12 shopping centre; Vanishing Point’s funny and touching Interiors at the Lyric Studio and a sparkling staging of Stephen Sondheim’s Company by the tiny Union Theatre.

Turkey of the year? Well there are a number of contenders but we think April de Angelis’ utterly implausible and unfunny, Amongst Friends, one of a number of duds at Hampstead Theatre, just about pips the epic but ridiculous Ben Hur Live at the O2.

And so, to business, presented in no particular order, chronological or otherwise, here it is: The musicOMH London Theatre Top Ten 2009

A first-class revival of what is arguably Tom Stoppard’s best play to date, David Leveaux’s production presented a multi-layered narrative which was uncharacteristically moving as well as being witty, intellectually stimulating and theatrically inventive. Samantha Bond and Neil Pearson stood out amongst a talented ensemble cast.

Sound&Fury and Bryony Lavery’s collaborative piece about the Russian submarine disaster was immersive theatre at its very best. Taking its time in exploring the minutiae of the confined underwater world of life aboard a British sub, Mark Espiner and Dan Jones’s production at the Young Vic’s Maria Studio (and later at the Drill Hall in Edinburgh) excelled in the way it trusted the audience’s imagination to conjure the full horror of events.

Provocative title aside, Mike Bartlett’s latest play was layered and fascinating piece of writing, superficially about sexual identity but running much deeper than that. James Macdonald’s potent production, staged minus set and props, saw the Royal Court’s upstairs space turned into a mini arena in which unsettling emotional tug of war took place between the terminally indecisive John, played by Ben Wishaw and the two people, one male, one female, vying for his affections superbly played by Andrew Scott and Katherine Parkinson.

Six hours of Shakespeare in a foreign language may seem like a daunting prospect but this production by Toneelgroep Amsterdam turned out to be one of the year’s most exciting and unique theatrical experiences. The company presented Coriolanus, Julius Caesar and Antony and Cleopatra together with no intervals, inviting the audience to move about the auditorium and even come up on stage if they felt like it. As well as being formally innovative it also succeeded in making these plays feel intensely relevant to our current political situation.

5. It Felt Empty When the Heart Went at First But it is Alright Now, Arcola Theatre

Lucy Kirkwood’s powerful play for Clean Break about sex trafficking bravely resisted the urge to bludgeon its audience with shocking statistics and instead told one girl’s story in an inventive, moving and very human way. Aided by a superbly warm and engaging central performance from Hara Yannas and a genuinely exciting part-promenade staging from Lucy Morrison in the Arcola’s cavernous new Studio K, the production actually achieved that much talked of thing it took the audience on a journey and left them feeling emotionally drained.

Mark Rylance, he make us happy. While it’s true that Jez Butterworth’s award winning play could have done with being half an hour shorter, at least this allowed for more Rylance time. Playing the potentially unlikeable Johnny Rooster’ Byron, a trailer-dwelling Pied Piper figure, his performance was an astonishing, physically transformative piece of acting. If you missed this at the Royal Court, it will be at the Apollo Theatre in the West End from 28th January 2010.

Tadeusz Slobodzianek’s powerful and controversial epic play about an anti-Semitic atrocity in wartime Poland was given a brilliant staging by Bijan Sheibani for its world premiere at the National Theatre. Harrowing but unforgettable theatre.

A co-production from the National Theatre Scotland and Dundee Ensemble Rep, this exuberantly earthy version of Ibsen’s poetic epic saw Colin Teevan’s free modern adaptation remaining true to the original spirit under Dominc Hill’s imaginative direction. It’s an outstanding example of how a true theatre classic has the depth to be endlessly reinvented for future audiences.

Tim Crouch’s latest engaging experimental work forced the audience to look at themselves literally there was no stage, only two banks of seating with the performers sat amongst the audience. The play managed to be both a clever dissection of the theatre-going experience and an exploration of how extreme and disturbing material can infiltrate the minds of those who come into contact with it. At times it felt a bit too meta for its own good, but it was one of the year’s most inventive and memorable productions.

Though some would argue that she was miscast, Rachel Weisz excelled in the role of Blanche Dubois and in doing so put a new slant on one of the theatre’s most iconic female characters. Physically and emotionally delicate, drifting round the stage in her red silk robe, her Blanche was easier to empathise with than most. Superb suppport too from Ruth Wilson in the usually sidelined role of Stella.