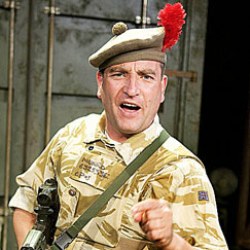 Another awards ceremony, another shelf-load of trophies for the Donmar Warehouse.

Following the pattern set during the Evening Standard Awards and Critics’ Circle Awards, the 33rd annual Lawrence Olivier Awards arguably the most prestigious theatre awards of the year saw gongs handed out to The Chalk Garden (best actress Margaret Tyzack) as well as to their West End production of Twelfth Night at Wyndham’s (Best Actor Derek Jacobi).
One notable omission was the Donmar’s Artistic Director Michael Grandage, who was not even shortlisted for his productions which included both The Chalk Garden and Twelfth Night as well as the acclaimed staging of Ivanov, starring Kenneth Branagh (who, incidently, was also not short-listed).

The Best Director category went instead to John Tiffany, who won for the National Theatre of Scotland’s production of Black Watch. This also picked up Best New Play, even though it started life at the 2006 Edinburgh Festival and so by most standards was hardly a new production. But it only played the Barbican in London last summer and, as a result, wasn’t eligible for the Oliviers before now. The Oliviers are the awards of the Society of London Theatres (SOLT) and only productions that have been staged in one of their venues can be nominated.

In the ceremony which took place on Sunday 8 March at London’s Grovesnor Hotel, the RSC did particularly well with Michael Boyd’s Histories Cycle winning both Best Revival and Best Company Performance. Patrick Stewart was awarded Best Performance in a Supporting Role for his portrayal of Claudius in the RSC Hamlet at the Novello, a typically powerful performance that was slightly overlooked in the fuss surrounding David Tennant’s involvement with (and subsequent absence from) the production.

The Menier Chocolate Factory was also successful, with the West End transfer of their production of La Cage aux Folles picking up Best Musical Revival (beating Piaf, Sunset Boulevard and West Side Story). It also scooped the Best Actor in a Musical award for Douglas Hodge. Best Actress in a Musical went to Elena Roger for her show-dominating turn in Piaf another production that originated at the Donmar before moving to the West End while the award for Best New Musical went to Jersey Boys.

The unique La Clique deservedly picked up the award for Best Entertainment while Yazmin Reza’s God of Carnage (rather less deservedly some might argue) won Best New Comedy though the competition wasn’t exactly stiff in that category. Alexi Kaye Campbell’s compelling debut play The Pride got a nod for Outstanding Achievement in an Affiliate Theatre. Their were further awards for both the RSC and the Donmar in the technical categories with Todd Rosenthal’s striking Gothic dolls house set for August: Osage County winning the Best Design prize.

Here are the awards in full:

Best Actress: Margaret Tyzack for The Chalk Garden at the Donmar Warehouse

Best Performance in a Supporting Role: Patrick Stewart for the RSC Hamlet at the Novello

Best Company Performance: The Histories at the Roundhouse

Best Actress in a Musical: Elena Roger for Piaf, first at the Donmar Warehouse and then at the Vaudeville

Best Actor in a Musical: Douglas Hodge for La Cage Aux Folles at the Playhouse

Best Performance in a Supporting Role in a Musical: Lesli Margherita for Zorro at the Garrick Theatre

Best Lighting Design: Paule Constable for The Chalk Garden at the Donmar

Best Costume Design: Tom Piper and Emma Williams for The Histories at the Roundhouse

Outstanding Achievement in Dance: The Royal Ballet of Flanders for Impressing The Czar at Sadler’s Wells

Outstanding Achievement in Opera: Edward Gardner for conducting English National Opera’s Boris Goduinov, Cavalliera Rusticana, Der Rosenkavalier, I Pagliacci, Riders To The Sea at the London Coliseum and Punch And Judy at the Young Vic

For further information on this year’s Oliviers visit: www.solt.co.uk