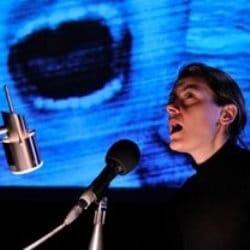 text, images, direction
Tim Etchells
In their 25th year, Forced Entertainment continue to be formidable champions of what one could call untheatre.

There’s no stage and no actors; just four performers reading out a radio play and a phantasmagoric storyboard projected on a silver screen.

In a dystopian world nestled somewhere between Bladerunner, a JG Ballad short story and present-day Hackney, flatmates Jackson and Kim are experiencing a serious case of bad luck.

Evicted from their flat for apparently no reason at all, they get subsequently shot at, thrown into a lake of sewage, attacked by two-headed killer bees and enslaved by an arms dealer; and that’s just the first ten minutes of it.
It’s a bleak, bleak world, and one that is fantastically conveyed by the play’s unconventional form. The black and white storyboard, projected a frame at a time, is a warped collage of impossible spaces pasted together from images found on Flickr and uncanny characters whose faces are assembled from separate mouths, ears and eyes. Together with the radio-style sound effects, this creates a truly nightmarish environment where time seems to be perpetually stuck in the pre-dawn hours of the morning.

However, this post-apocalyptic atmosphere of all-round hopelessness is filled with the dark, perceptive comedy of Tim Etchells’ script.

Etchells is a master of the absurd. In a typical scene the unlucky pair barricade themselves in a wood hut to escape from a bear, tired, wounded and on the brink of collapse, when the phone rings and a woman’s voice, speaking over New Age music, asks: Have you heard about Jesus? She then proceeds to tell the legend of how Jesus fixed his Sat Nav device, only to stop at the crucial part and demanding a donation in order to finish it.

Much of the humour reminded me a lot of BBC’s Monkey Dust. Like in Monkey Dust, grotesque events mix with the dead-pan delivery of the performers: Ah. I think I’ve been shot. [Gurgle-gurgle-gurgle.] Yes, you’re bleeding all over the place. And like in Monkey Dust, the comedy often resonates with our own society’s fears and obsessions, like when a manipulative four-year-old threatens to accuse Jackson of paedophilia if he doesn’t buy her a balloon a modern paranoia also parodied in Monkey Dust‘s character of Paedofinder General.

While the story might be ‘void’ in a sense of being without any hope for redemption, it’s certainly a very strong story, pulling you along with its quickly paced string of unfortunate events, the hapless protagonists’ fate taking a turn for the worse on every corner.

And it’s in this kind of hyperbolically gory story telling that much of the comedy resides; a bit like in Voltaire’s Candide, where the nave hero ventures through war and disaster-torn 18th Century Europe. The ills befalling the characters in both stories are monstrous in their numbers: for example, a woman giving Kim and Jackson a lift tells a tall story of how she lost her job, husband, most of her family, her dog and her uterus, much like the Old Woman in Candide whose own adventures include several similar misfortunes, including getting her buttock cut off.

But, like Candide, who refuses to give up his optimism in spite all the terrible things that happen to him and his companions, Kim and Jackson persist in their uncomplaining search for a less troubled existence. Despite their uncertain future, you leave the show feeling, in some way, comforted at least they have each other.