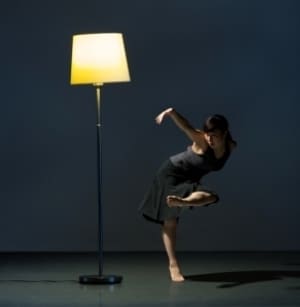 Yael Flexer and Nik Sandiland’s works challenge the traditional boundaries between the performers, audience and choreographers.

Digital media allow this to be developed to a greater extent in the installation, orbital, in which the position and movement of the viewers determine the movement is seen being made by an image of the dancer projected onto the floor of the space.
The “audience” then go through into the main hall, where dancers are already moving around, chiefly on the floor, as if their work is already in progress. Has it already started? Are we intruding on a rehearsal? What is happening?

After around 10 minutes of movement and interaction, there is then what appears to be a formal beginning.

The work is characterised throughout by the appearance that the work is still being created, the performers discuss with each other, sometimes addressing the audience, as they discuss how the work should progress. They challenge each other, for a piece of the action, assisting and interfering in each other’s movement, vying with each other in a shared space. Yael Flexer has address these concerns in previous work, for example as a duet, but here they are played out on a larger company.

There is a lengthy section in which the performers each in turn take the role of an item of furniture usually found in the “living room” after which the work is named; the room is ‘living’ because its furniture is human and moves around. An imagined domestic space is created. This has a certain humour, but may also remind viewers of “music and movement” classes in a school, to which there is perhaps a tongue in cheek reference. The adult performers are initially joined by the young daughter of the choreographer, clearly a rising star herself, who was very popular with the audience.

A further recommencement occurs, to be followed by the dancers competing with each other as to who should perform a solo. They play out the mundane squabbles and resentments that go into devising a piece of choreography: who goes first? Who gets the best steps? A struggle for control is evident. Intermittent banter and wry comment punctuate choreography which is itself sharp, angular fast paced and skilful.

Later in the work, there is a longer section of dialogue in which the company discuss their defining characteristics, making the audience think which of these may be in common between performers and themselves. This is actually one of the most funny and moving parts of the piece. Accompanying the movement and interaction there is live music from cellist Karni Postel, whose instrument is amplified for much of the work, to intriguing effect.