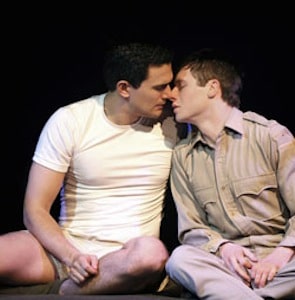 directed by
Igor Goldin
Yank! is an ambitious new musical, presented at the York Theatre, which succeeds in pulling the audience into its world and bringing them out to the other side both entertained and thoughtful. At its core, Yank! is a love story set in World War II in the U.S. Army. The love story happens to be between two men, but the honesty and slow burn of their attraction makes the homosexuality seem almost beside the point. For this, huge credit goes to Ivan Hernandez and Bobby Stegggert who portray the two servicemen, Mitch and Stu, with a depth exceeding the traditional war story stereotypes. Though their gender seems almost beside the point, however, of course the fact that the lovers are both men in the 1940s is simultaneously very much the point.

Engrossing as it may be, the homosexual angle is not the defining characteristic of this show, which operates on multiple levels. Yank! tells their love story as just one part of the overall enlisted experience, defining the squad in terms of well-vetted, mismatched types that ultimately become friends: the Boston nerd, the Southern hick amongst others. Of these, Tally Sessions as the Brooklyn rough is particularly effective.
The show also exploits the vocal talents of Nancy Anderson to set the tone with an homage to 1940s tunes, newly written but appropriately Big Band-sounding. The music and lyrics by Joseph and David Zellnik (brothers) fit wonderfully into the story and the time period.

Yank! fluctuates, well balanced between light-hearted and serious tones for most of the evening. But ultimately there’s a bit of trouble in the second act. The second half piles on obstacles to a happy ending fast and furious, only to jar you out of the moment with a dream ballet sequence that seems wildly out of place. The ballet is an echo back to 1940s movies, and it is an echo that never quite works. However, the play pulls itself out of a tailspin at the end. Yank! ends ambiguously, leaving some details to the imagination. It is a great ending, leaving the audience with a sense of hopefulness.

Ultimately, Yank! is fun show that makes you smile, think and wonder. It is all you can ask from a night at the theater.