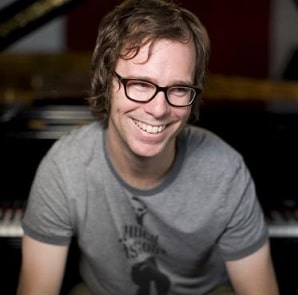 Ben Folds Five’s comeback tour follows a comeback album, The Sound Of The Life Of The Mind. That album was met with an unenthusiastic critical response and a similarly muted commercial performance, entering the UK album charts at number 40.

Yet it’s apparent tonight – on the second of two shows at Brixton Academy – that Ben Folds Five are treating the new album as if it hadn’t arrived a full thirteen years after its predecessor, 1999’s The Unauthorized Biography Of Reinhold Messner. The reunited trio end up playing seven of The Sound…’s ten tracks. Of these, the barnstorming Michael Praytor, Five Years Later and Draw A Crowd (the latter with its instantly catchy chorus refrain of “If you can’t draw a crowd, draw dicks on the wall”) get the best response. But it’s the classics drawn from those excellent first three albums that the vast majority crowd are here for, and most of those classics arrive, eventually: Jackson Cannery, Battle Of Who Could Care Less, Philosophy, Army and Underground – every single one a solid gold staple of 90s alternative radio.

Yet it has to be said that none of these songs sounds especially 90s or, indeed, ‘alternative’. Ben Folds (with or without his Five) always seemed liked he’d have been most at home in the mid-seventies, nestled alongside similarly waspish piano-based songwriters like Randy Newman on the Reprise roster.

That said, Folds’ songs often benefit from a bit of post-grunge aggression. He’s never more aggressive than on Song For The Dumped, whose chorus – lest we forget – goes as follows: “Fuck you too … Give me my money back, you bitch!” It’s a sentiment that’s in danger of tipping into mob-level misogyny when chanted back to him by 5,000-odd (mostly) men, but, fortunately, it’s rescued by the ridiculousness of the line that follows: “…and don’t forget my black T-shirt!”

And there was always a more sensitive side to The ‘Five. Brick remains one of the greatest break-up ballads of the nineties, and tonight it’s treated with the reverence afforded typically to a hymn. Elsewhere, Selfless, Cold and Composed is testament to the trio’s technical proficiency, but its low-key, jazzy elegance gets rather swallowed up in the cavernous environs of the Academy.

Folds seems at pains throughout to big-up the contributions of his rhythm section comprising bass player Robert Sledge and drummer Darren Jessee. He directs the audience applause towards them at the climaxes of certain songs and name checks each of them multiple times. Perhaps he’s addressing the intra-band politics that tend to beset comeback tours.

Yet Ben Folds Five were always much more than just a vehicle for their titular singer. Above all else, they rock: Sledge’s fuzz bass lends Underground an almost glam rock-like stomp, while set closer One Angry Dwarf And Two Hundred Solemn Faces hurtles forward with the barely-contained anarchy of the best punk rock. A treat.