by musicOMH
published: 1 Jun 2007 in Classical and Opera Features
Tweet 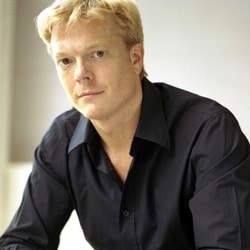 Toby Spence doesn’t look like an opera star. Athletically built, with spiky blond hair, he actually looks more like a surfer (which he is, incidentally, when the diary allows) and carries himself with an easy-going air that is befitting.

But this relaxed exterior conceals a high profile tenor voice that is in demand across the world.

Like many British singers, however, it took a while for him to command such recognition.

Spence took the traditional route, starting out as a choral scholar at New College, Oxford, then continuing his studies at the Guildhall School, before making his operatic debut in Idomeneo with Welsh National Opera, pipping a young Ian Bostridge to the part of Idamentes, “only because out of the two main arias, I sang the easy one and Ian sang the really hard one,” he adds. It’s a telling remark. Whilst discussing Spence’s remarkable achievements I am struck by his simple modesty and immaculate manners, indeed they threaten to throw the interview off its course at times when he politely turns the questions round to me.

At the forefront of a flourishing generation of British singers, Spence is perhaps best known for his involvement with Thomas Ads’ latest opera The Tempest, which was revived at Covent Garden this spring. Critics have described the piece as a great work, and he is tempted to agree. “Time will tell, but what I do know is that it doesn’t pall with more listening, it gets stronger in my mind and I still enjoy listening to it, having heard it so many times.” He has now played Ferdinand in three productions, including the new interpretation from Jonathan Kent in Santa Fe, which he describes as “visually strong but in a much more literal sense.”

Spence has earned huge respect for parts in stalwart hits such as Il Barbiere di Siviglia and The Magic Flute, but is now enjoying the freedom to explore a wide range of projects. A production of Wagner’s Die Meistersinger von Nrnberg featured on last year’s schedule, and he has just returned from Paris where he was working on Handel’s L’Allegro, Il Penseroso ed Il Moderato with the revered Baroque specialist William Christie. His fondness for Britten is also well known, having recorded Les Illuminations with the Scottish Ensemble and stunned audiences as the Madwoman in Curlew River at the 2005 Edinburgh Festival. In short, Spence is an outstanding all-rounder (one is tempted to say Renaissance man, but that seems to be the one style he has yet to take on).

“the musical line is informed by the dialect”

This month’s revival of Ktya Kabanov by The Royal Opera will add another string to his bow. The production a revival of Trevor Nunn’s acclaimed interpretation is one that Spence admired at its first outing in 1994, and he is relishing the challenges posed by his role as Vna Kudrj. “[Jancek] is fascinating as a writer because he writes in the dialects, of which there are many in Czechoslovakia, apparently, and the musical line is informed by the dialect, so what you have is a musical annotation of how they spoke.” Although Spence has done Jancek’s The Diary of One Who Disappeared in the past, he admits finding the guttural articulation tricky at times. “There are some words that are just consonants, and then words like ‘srdce’, which is a two-syllable word with just one vowel,” he laughs.

It is hard to imagine that Jancek’s operas, now part of the standard repertoire, languished so long in obscurity and struggled hard for acceptance. It was Sir Charles Mackerras, the great champion of Jancek’s work, who introduced Ktya Kabanov to an unsuspecting and largely unappreciative British public in 1951, and it is Mackerras who returns to conduct this production. “He is the man!” Spence declares. “It’s an extremely difficult piece and when a piece like this is done it’s usually a conductor who knows it but is insecure with it, but [Mackerras] is completely on top of it.” The opera is notoriously intense but Spence is upbeat about rehearsals: “in my experience of intense operas, you tend to be quite light in the rehearsal room, and just shake off the intensity of it all.”

“in my experience of intense operas, you tend to be quite light in the rehearsal room”

Weighing heavily on his mind must be the role of Tom Rakewell, which Spence will be playing in three different productions of The Rake’s Progress, in four different opera houses over the next few years. It is a role that will demand a cold-hearted caddishness as yet unseen in Spence (though there’s certainly an element of Dorian Gray in this youthful thirty-seven year-old) and will provide a real sense of focus for the next couple of years. “It’s an extremely long and challenging role and I just can’t wait to get going, but I don’t expect to really start being satisfied with it until the fourth one, even beyond that.”

In the meantime, Spence is booked to appear at the Aldeburgh Festival his first performance there since his auspicious debut as a thirteen-year-old oboist in the IAPS (prep schools) orchestra. It means another collaboration with Ads who will provide piano accompaniment and perform his own work, Darknesse Visible at the same concert but this time Spence got to choose his own programme, which will involve a couple of Purcell songs, and some Britten, of course. “When I told Tom we were going to do the Michelangelo Sonnets he goes [mock deep voice] ‘oh…I’ll practice my octaves.’ Very damning!” he says, roaring with laughter. “I adore TomI love being around him and hearing his silly comments, and brilliant comments too.”

Spence’s contribution to the festival founded by Britten will be a fitting tribute to the great man. It was, after all, an early encounter with Britten’s Peter Grimes that first inspired him to sing professionally. “That was the one. I was captivated by the music, I came out absolutely spellbound by it, and knew that I would be privileged to strive towards something like that.”