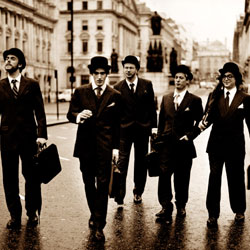 There are times in a band’s career when they’ve collected their best new songs, rehearsed and perfected them, put them together into a CD package worthy of release and are ready to go on the road.

There’s just the small matter of some press and promotional work to let people know that they’re back in town.

Gomez are currently at this stage with their upcoming fourth album Split The Difference.
musicOMH managed to collar them for a chat in between TV appearances…

In person, Gomez come across as a group of five intelligent, articulate lads who, for a band formed over eight years ago, still get on incredibly well. When I meet them they’re in high spirits. Keyboardist / vocalist Tom Gray, the most talkative and sharp-witted member, paces around the room while he talks while guitarist and fellow vocalist Ben Ottewell (the one with that voice) shares out cigarettes with drummer Olly Peacock and bassist Paul “Blacky” Blackburn. Only co-frontman Ian Ball looks on less than top form, spending much of the interview looking decidedly subdued.

I put it to them that the new single Catch Me Up, a raw but incredibly catchy stomper, is one of the most upbeat songs they’ve ever done.

“I think it’s a result of not drinking or smoking as much as before,” Olly admits. “We just came out with a lot of quicker tunes this time. We didn’t think about it, but we had done a lot of live gigging in America and so were on form in that way. The thing which influenced me was hearing The Kings Of Leon, ‘cos it was toe-tapping and it made me think, you know, I wanna play something quick.”

“But more so than that was that Black Keys record,” adds Tom, as the other band members nod in approval. “It was just like, yeah all right, go on lads. They’re brilliant.”

“I think it’s a result of not drinking or smoking as much as before.”
– Gomez drummer Olly Peacock on the reason for their new upbeat sound.

The blues rock sound nurtured by US bands such as the Black Keys has been a strong element of Gomez’s music since the the loose-limbed swagger of their debut Bring It On. This, coupled with Ben’s voice (which almost seems designed to sing the blues), could explain the band’s steadily-growing success in the USA. If anyone has wondered where the band has been since the 2002 album In Our Gun, it’s been trawling the long roads between venues from East to West coast. Do they feel they’ve cracked America yet?

“It’s cracked us, I think,” Tom quips. “It’s one of those ones where we go and lots of people show up at the shows. Whether that means we’ve cracked it or not…” He shrugs. “We’ve never really had radio play.”

“It’s all come about just through the grass roots and people coming to shows,” says Ben. “It’s not always easy to discern what’s happening to you when you’re a musician. But every time we go back there there are a couple of hundred other people coming to see us.”

There then follows a discussion of US geography and it quickly becomes apparent that Gomez have played a lot of places in the States, not just the coastal cities. Cincinatti, Lincoln, Salt Lake City, Philadelphia – the list is as long as your arm. However, touring the States is no easy task, and the band admit to spending a lot of time in the tour bus.

“It’s silly,” says Ben. “You have days off where literally you drive in overnight from one place, you’re there for just a few hours and you drive off again.”

With four albums now under their belt, the band are pretty experienced in the workings of the music business, and they have interesting opinions on the state of the industry. Take the internet and music downloading, for example:

“Being against it is like being against the inevitable.”
– Gomez keyboardist Tom Gray on the futility of opposing music downloading.

Surprisingly, he doesn’t see downloading as a threat to his livelihood.

“I completely agree that musicians should be able to earn money from what they’ve made, and if that doesn’t happen then there’s a problem. But as is, that isn’t what is happening.”

“It’s being regulated more and record companies have got their own sites where you can get stuff from,” Olly points out.

“That’s the only way I can see past it,” agrees Ben, “if you forego the packaging, all that expense, and just sell the tunes online. But if you hear a tune online, then a lot of people would buy the CD anyway.”

“It’s just like making tapes for each other,” says Tom. “My entire record collection was on tapes, I didn’t buy any records. I had about 500 C90s. When you got bored of something you just taped over it.”

Ben gets down to the issue of why record sales in general are in decline.

“The record industry just had this boom period when they rereleased everything on CD. Everything from every decade was being sold. Eventually everyone got everything they ever needed.”

“Now there’s actually nothing left to sell to anybody,” Tom continues. “The greatest mistake was the record industry becoming fully floated. The problem is shareholding – people expecting 10% increases on their share values every year in an industry which cannot grow. But even when the share price is flat the profits are still massive. Record companies announce they’ve made $100 million dollars and the same week they sign Mariah Carey.”

A lighthearted discussion follows about Ms Carey’s record deal, the general conclusion being that she’s a bit bonkers.

A Gomez / Mariah Carey duet ever likely then?

“I’d love to, it would be great,” he deadpans. But the rest of the band dissolve into laughter.

“I’d love to, it would be great.”
– Gomez vocalist Ben Ottewell gets his tongue stuck in his cheek as he considers duetting with Mariah Carey.

Seriously though, is there anyone you would like to duet with?

“Rufus Wainwright,” says Ben. “But he’d just sing us all off stage. We’d just have to let him do it.”

For some reason, a duet between Ben and Joe Cocker is mooted.

“Yeah, I’d just take the woman’s bit of Up Where We Belong,” says Ben drily. Further names of Sade, Britney Spears and Sarah Brightman are suggested, but by now I suspect the band aren’t taking the question entirely seriously.

With a UK tour booked for May, festival appearances are in the pipeline. Glastonbury is likely but, as ever, unconfirmed until the eve of the festival. Another stint across the States is planned after that.

“We’re doing Lollapollooza for two months and we’re starting to worry about it already,” says Olly, revealing they’ll be sharing the bill with the likes of Flaming Lips and Ween. “But we’re only on the alternative stage,” Ben adds.

Still, they have reason enough to be pleased with themselves. It’s going to be a busy year for Gomez – catch them here while you can.