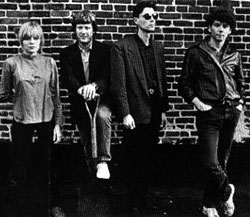 “Its not yesterday anymore”

New England’s Rhode Island School Of Design declares that part of its contemporary mission is to “prepare its students and the broader community to be creative and responsive to the needs of global society”.

Caught in the ecstatic whirl of rapid-fire signs and signifiers of a crossfire mass media, only a curmudgeonly academic would assess that the collective work of former alumnae David Byrne, Chris Frantz and Martina Weymouth (with the later addition of the ex-Harvard Jerry Harrison) had not fulfilled that dictum.Though the latest of a number of collected retrospectives, the re-release and remastering of Talking Heads’ eight studio albums in bewildering double-disc format (original CD with bonus tracks plus DVD with full audiophile DVD-A sound with videos and photographs, and a few other tantalising, credit account-emptying extras) is the last word on one of rock’s more indelible statements of (post) modernity.

musicOMH offers its own retrospective of a legacy that successfully criss-crossed CBGB Punk, mutant Disco, Art-Funk, Afro-Beat, kooky pop, ambient-aesthetic and all points in-between. With respect to the subject, MusicOMH would like to point out that ‘facts just twist the truth around / facts are living turned inside out’.

Endemic to the Talking Heads oeuvre is David Byrne’s wide-eyed ‘everyman’ persona, a conduit for the themes of dislocation explored via the urban refusenik of The Big Country ( ‘I wouldn’t live there if you paid me, nossiree” to the stetson-hatted good ol’ geek of True Stories to the anomie of Naked’s (Nothing But) Flowers (“I can’t get used to this lifestyle”).

Though they formed in the crucible of back-to-basics NY Punk ( and were viewed rather suspiciously so by some denizens of that scene), by the time of 1980’s Remain In Light, Byrne’s simulacra of New World man, caught like a rabbit in the headlights, levitating somewhere between the boardroom, the laboratory, sleepy suburbia, glass-towered urban developments, edgy NY post-disco nite-clubs, belonging and alienated at the same time.

Byrne’s agitated front man and the warm skeletal chop of his guitar lines were only part of the story. Martina Weymouth’s over-the-hump bass had more in common with Bootsy Collins than the leaden changes familiar to Punk. Drummer and future-beau Chris Frantz’s obsession with high-end dynamics, for greater audibility on hi-tech dancefloor sound systems, further distanced them from the swiftly-narrowing horizons of Punk. The multi-skilled Jerry Harrison, fresh from Jonathan Richman‘s Modern Lovers (Richman’s faux-naif was identifiably part of Byrne’s everyman persona, particularly on Talking Heads ’77) added to the mix, after pitching the original trio at a Boston performance in 1976.

” the band wore bargain-store comfort clothing, a work-shirt ethic that underlined their collective belief that ‘being creative is a job'”
The sartorial philosophy of Talking Heads

As time progressed, the foursome augmented their sound with various like-minded souls (this re-release features an ‘acoustic’ version of Psycho Killer with dub-disco cellist Arthur Russell) including one-time fifth member, Brian Eno. Though Eno’s co-producer credits began on 1978’s More Songs About Buildings And Food, the band’s expansive instincts had already been subtly introduced with the occasional fill of distinctly un-punk brass and steel drums, and a delicate swerve towards an angular danceability, particularly on debut single Love —> Building On Fire.

Despite the clipped urgency of Byrne’s playing, Buildings And Food featured Chic-like chicken scratch guitar (see I’m Not In Love) and Harrison’s modulated synth-lines (particularly Stay Hungry) that anticipated the horizons to come. To underline the band’s dedication to subverting the trappings of the rock biz, the band wore bargain-store comfort clothing, a work-shirt ethic that underlined their collective belief that ‘being creative is a job’. Eno’s desire to extricate the parameters of his own personality from the creative process found its perfect sounding-board with Byrne and company.

Once Eno and the band had sharpened the the metallic edges of More Songs About Buildings And Food, the shackles truly came off with 1979’s Fear Of Music. Byrne’s high-register had already adopted something of a panicky timbre, laced with tenebrous shades of amphetamine comedown, but on Fear Of Music, he picks through the detritus of beliefs and value systems like a man on a knowingly-doomed mission to discover the meaning(s) of life.

On Fear Of Music, the ego is self-destructive (Memories Can’t Wait), domesticated pets conspire against humanity (Animals), and neither science or religion (Mind) or the standby’s of an increasingly defunct counterculture (Drugs and Electric Guitar) offer salvation. An escape may exist from the eternal verities, but it’s a mecca of blankness (the Neil Young-inspired Heaven) : I think therefore I’m terrified, from rationalism to despair in just three albums.

There is plenty of fear on Fear Of Music, but precious little of it is of music, its title as inapt as Cliff Richard‘s Rock ‘N’ Roll Juvenile released the same year. Beginning with the Hugo Ball-derived chants and equatorial rhythms of I Zimbra and ending with the spaced-out nihilistic dub of Drugs, the open-house of Fear Of Music really was a new wave.

But its universalist embrace was nothing compared to Remain In Light. The final collaboration with Eno, its tightly-wound structures reflected the tension that now existed between the band and the egghead Brit. After Fear Of Music, Eno and Byrne had been working on the project that would eventually become My Life In The Bush Of Ghosts, an event horizon of soundbite plunderphonics and re-codified indigenous music that was a continuation on the sound theories that Eno had been exploring on his Obscure imprint. Eno wanted the nascent Remain In Light to carry a similar co-credit, but the increasingly marginalised Frantz, Weymouth and Harrison strongly disagreed. The explicit nature of this album’s credit list are stark evidence of the revolt.

The album’s genesis had creation had much in common with Teo Macero’s policy of constructing Miles Davis albums from the scraps of groove and random melodic ‘ideas’. With contributions from Labelle‘s Nona Hendryx, Jon Hassell, sideman Adrian Belew, and Robert Palmer (yes, that one), those ideas eventually coalesced into the polyrhythmic stew of Remain Of Light.

Released at the cusp of a new decade, even Remain In Light’s darker edges possess the eureka optimism of a new discovery. Weighing in with just eight tracks, the album’s three-song intro most closely reflects the impact of George Clinton‘s Parliament / Funkadelic and the king of West- African fusion, Fela Anikulapo Kuti. The likes of Born Under Punches and Crosseyed And Painless find a home in the sets of the more outre DJ sets ever since.

Tracing lines of latitude and longitude from the fervour of the American Bible Belt to frantic Eastern chants and the trance rituals of Africa, Remain In Light’s synthesis created an atmosphere of sensory overload unaided by chemical stimulants. With MTV dawning, the promotional video for Once In A Lifetime rocketed Byrne and the band to a wider audience for the first time. The Overload, the album’s dense, slow-rolling denouement suggested absolute exhaustion.

Three years lapsed until the first post-Eno album, 1983’s Speaking In Tongues, said to be the band’s most commercially successful record. Yet with Eno gone, there was a distinct sense of after-the-lord-mayor’s-show. Not that Remain In Light wasn’t evidence of a rhythmic surety that had been in place since Talking Heads ’77, but Speaking In Tongues heralded a strong sense of stepping back from the brink of self-discovery.

With a more streamlined emphasis on the dancefloor, the spare, ghostly reverb of tracks like Burning Down The House (despite its ‘megamix’) and Girlfriend Is Better lacked the intensity of previous Heads outings, while the likes of Swamp and Moon Rocks simply sounding muddled.

Though they played well live (as seen on the in-cinema movie soundtrack of Jonathan Demme’s celebrated concert film Stop Making Sense), the album’s somewhat flat production sees this record appear frozen in time. Typically, the album’s most singular success was the back-to-basics This Must Be The Place (Naive Melody). Also, the record had been trumped by the surprise success (and far more convincing funkiness) of the Weymouth / Frantz offshoot project Tom Tom Club and its hit singles Wordy Rappinghood and Genius Of Love.

By the time Byrne’s oversize suit of Stop Making Sense had become a recognised trademark, the band had the backing of EMI. Released in 1985, Little Creatures has the gloss of many of the slickly sequenced big-hitters of the time. Its cover-painting and the homogeneity of its content no longer implied intoxication and dislocation but a rather homespun anthropology. The humdrum Creatures Of Love and Perfect World together and the self-conscious Television Man suggested a band suddenly lacking in inspiration.

That said, hearing the accordion-led Road To Nowhere and the chart-savvy And She Was on daytime radio next to the Phil Collins and Dire Straits of the time was a rare thrill. In addition, the re-mastering process has highlighted previously unknown detail on the EMI Talking Heads albums, creating a fresh lustre that they initially lacked when placed next to the esprit de corps of the first four albums.

True Stories was Byrne’s own project, a visual travelogue through a ‘normalised’ America that was just rescued from condescension by Byrne’s sense of man-who-fell-to-earth style disengagement. The True Stories album is not the soundtrack, but Talking Heads versions of songs from the film.

Though the highly durable videos for Love For Sale and Wild Wild Life gained the critical plaudits, True Stories is a much easier record to love than its predecessor. Puzzlin’ Evidence posits an unlikely halfway house between the garage-swirl of ? And The Mysterians and the tabernacle-worrying Edwin Hawkins Singers, while Byrne’s lean guitar lines rescue Dream Operator from the soporific. And of course, Radio Head gave a title to the band that successive readers polls in UK music mags might lead one to believe are the greatest ever.

If the small-town stereotypes of People Like Us declared ‘we don’t want freedom / we don’t want justice / we just want someone to love’, many of the songs on Naked (1988) had a hitherto unhinted at acerbic tone. With the 1988 American election in full-swing, The Democratic Circus verged on the didactic, and the slow, fatalist air of Cool Water sounded incredibly close to The Swans grim four-sided epic, Children Of God.

The band’s final record, Naked has more bit parts then Robert Altman’s The Player. With guest-spots from Johnny Marr, Mory Kante, the Pogues‘ James Fearnley and Tower Of Power‘s Lenny Pickett (to name but a few), its dense structures were also the result of recruiting a troupe of local African musicians (local to Paris that is, where the album was recorded). On its release, the album drew comparisons with Paul Simon‘s sanction-trashing Graceland, yet enjoyed none of the commercial kudos, more down to the band’s (or more likely Byrne’s) resistance to promoting the record. A shame, as Naked is the more natural successor to the ambition of Remain In Light.

Steve Lillywhite’s original production brings out the best of Johnny Marr’s 12-string and Yves N’Djock appropriately floral guitar on (Nothing But) Flowers, and the assorted congas, horns and percussion highlighted by the remastering process add tropical force to the ever-distinctive Weymouth / Frantz backbeat.

One more single remained (Sax & Violins, included on Naked) before the official break-up was announced. Byrne now has a long-running solo career and the Luaka-Bop label he set-up has signed and re-released the likes of Jim White, Nouvelle Vague, Os Mutantes and Shuggie Otis; Though all three of Jerry Harrison and Frantz / Weymouth would produce the work of plenty of other artists since the band’s demise, the legacy of Talking Heads remains in light, intact. Accept no substitutes.