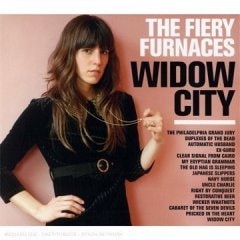 Welcome to the latest instalment of ‘At Home With The Friedberger’s’ as New York’s nonfictional FF, the Fiery Furnaces no less, release their fifth album-proper.

But despite the heartfelt star-rating above, it would be wrong to assume that Widow City represents a breakthrough in easy-listenability that will see it nudge Katie Melua for those major label POS stands in yer local HMV.

Yup, not many will let Widow City in the house scratching up the three-piece or staining the laminate, but since when was popular opinion the yardstick of quality?

Rather it would be wiser to expect more of the unexpected. Though they may knock out albums with the rapidity of a Sudanese regime change, it is my pleasure to report that the FF’s propensity for sounding totally nuts remains unabated.

Much Of Uncle Charlie has a rubber-room aesthetic that only the inmates viewed on The Cramps‘ one-nite stand at Napa State psychiatric hospital might understand. Even the bits when it sounds like they’ve ripped a few licks from Eddie Van Halen or Yngwie Malmsteen, God forbid.

But as much as the heights of happiness can only be truly appreciated by the slumps of misery, so the inner logic of FF albums can only be understood by placing the pop-ish delights of Automatic Husband vaseline-to-sand with noise pollution disorders like Wicker Whatnots and Clear Signal From Cairo.

But then dips in tempo and diversions in style abound pretty much everywhere. Sweeping pastoral passages, wobbly frequencies, goth-thrash, Zep-bluster and almost Beatles-ish harmonies fight for supremacy ‘ere and there, but only Eleanor’s talking blues has a kooky toehold on the winning podium.

And that’s just on Ex-Guru.

Navy Nurse alone switches from a warped Physical Graffiti out take to out-of-tune bontempi lift from Chris Montez‘s Let’s Dance to a bit of Siouxsie-esque spikiness. And back again.

And as for Widow City, it’s almost as if Les Dawson has been resurrected for a career volte-face soundtrack for Waiting For Godot. He hasn’t though.

Perfect for the download generation, Fiery Furnaces appear to have the attention span of gnats. No doubt there is an overarching themeology to Widow City, but frankly, I haven’t a scooby-doo what it is.

Naturally enough this shouldn’t detract from your enjoyment. Rather this studied disavowal of rules gives the FF a certain refusenik purity, and one that sets them well apart than the ‘zany’ pants-on-the-head antics of Peter Gabriel-era Genesis that they’ve been associated with elsewhere.

While there ain’t anything that screams instant classic like say, Single Again did, there are the occasional flirtations with radio-friendliness.

My Egyptian Grammar is this record’s I’m Waiting To Know You, where melody wrests a few sweetened moments from the narrative of disruption.

Duplexes Of The Dead is not only an ace title, but also risks some Kashmir-like blowziness but manages to survive the comparison and come out fighting. One reason for this is the ever-active presence of drummer Robert D’Amico who clicks into the FF groove like a Friedberger-born.

What’s more, for a 21st century rock band, there isn’t a single moment here that threatens to turn into an ‘anthem’ to be balled out at the Nestle-Monsanto Rock Festival at a mud-pit near you next summer.

For that alone we should be grateful.

The Fiery Furnaces MP3s or CDs

The Fiery Furnaces on Spotify