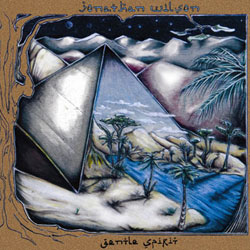 With a list of musician credits including Chris Robinson of The Black Crowes and Gary Louris of The Jayhawks and hippyish track titles such as Natural Rhapsody and Rolling Universe, it comes as no surprise to learn that Jonathan Wilson started recording Gentle Spirit in the fabled setting of Laurel Canyon. Singlehandedly credited with recapturing something of the classic early ’70s singer songwriter scene there with star studded jam sessions at his home, he seems transfixed by the area’s mythology. His debut album (a previous finished collection was never released) skates dangerously close to self indulgent pastiche yet contains some immaculately played gems that possess the definitive crackle of old school analogue tape sessions.

Opener and title track Gentle Spirit is a highlight, building from an elongated eerie piano and flute intro through emotional cracked vocal choruses to a glorious yearning coda of hanging tremolo guitar notes, swirling strings and affecting elliptical lyrics. “Love it is an apple core” he swoons, musing on circles and cycles of life blooming and decaying. Can We Really Party Today oozes Elliot Smith melancholy, Desert Raven shimmers with reverb-drenched pastoral sun-dappled Crosby, Stills And Nash riffs while Magic Everywhere opens with Neil Young acoustic guitar chords. Distant dusty pianos as if played in a deserted bar somewhere else entirely drift in and out beneath the lovely “pretty green leaves above us” hook.

The slow pounding psychedelia of Woe Is Me and epic 10 minute closing track Valley Of The Silver Moon in particular lean towards a sort of prog folk with songs unfurling at such a leisurely stoned pace it’s hard to see where these sprawling tapestries fit into today’s faster climate. Perhaps Wilson’s opus really needs to be appreciated whilst driving across the desert with the roof down.

Although a relatively new solo artist, Wilson’s sound and CV belie strong credentials. He’s played with a long list of stars including Jackson Browne and produced Will Oldham and more on a Roy Harper tribute album he’s currently curating. Gentle Spirit was finished in Echo Park and mixed by Wilson with Thom Monahan. It would be interesting to see if on future recordings, he could hold on the inspiration he takes from his Laurel Canyon predecessors yet free himself from the shackles of that history and take it somewhere really new and exciting. He’s certainly got the talent and the contacts to create magic.