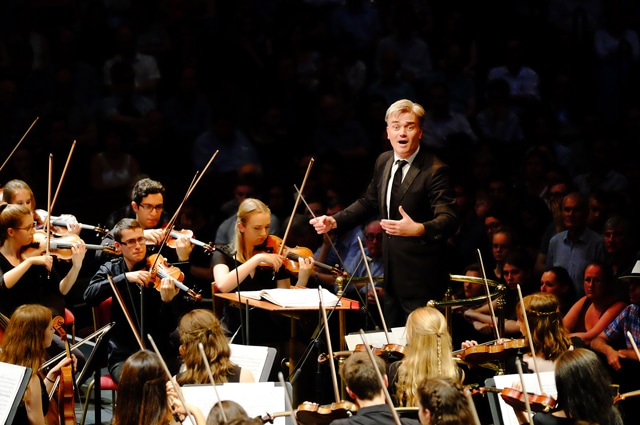 Saturday night’s space-themed Prom with Edward Gardner and the National Youth Orchestra required only the presence of the ubiquitous Professor Brian Cox to add icing to its cake, and it is surprising that his voice was not used in the recorded speech soundtrack to Iris ter Schiphorst’s commissioned work ‘Gravitational Waves,’ which must have been hugely enjoyable to perform, as it required the orchestra to sway, to shout, and to don carnival masks. Musically, it was the love-child of Murray Gold and György Ligeti: a filmic eight-minute exposition of orchestral timbres – amplified scratched gongs, breathed-into brass instruments, overlapping woodwind glissandi, massive Dr Phibes organ chords, and even a comic Zebedee spring effect – all of which the orchestra took in its stride, giving the piece an assured first performance.

One of the delights of NYO performances is that, because the players are not salaried, the orchestra can field as many as will fit on the stage, and nine trumpets punching out the opening arpeggio of surely the most famous 21 bars of space-associated music (the beginning of Richard Strauss’s Also Sprach Zarathustra) was an electrifying moment. The rich passage for low strings continued the delight with a more mellow ambience, followed by the perfect entry of the very Straussian horns. The dynamic throughout was well controlled, and the occasional violin duets were as late-romantic as they needed to be. The performance was quite a brisk one, and it would have perhaps made for more enjoyment if some of the steamier passages had been lingered over a little more, but this is a minor quibble. The ‘science fugue’ was properly rigid, but Strauss’s sumptuous ‘dance song’ waltz took a little while to find its feet. Overall, though, it was a good performance that a professional orchestra would have been proud to turn in.

There was no let-up in the intensity after the interval, as the orchestra embarked on the inexorable five-four-time representation of modern warfare, ‘Mars,’ the opening of Holst’s The Planets. Although the massive brass section and full organ certainly pinned the audience to their seats, the moments of quiet menace were also well observed. Indeed, Gardner and the orchestra pulled off extremely well Holst’s brilliantly varied and descriptive scoring of the entire suite. The cool, almost sylvan, charm of the in-reality-arid ‘Venus’ was adroitly portrayed through the well-controlled strings and woodwind, and the quixotic three-against-two that characterizes the opening of ‘Mercury’ skipped cheerfully along. The tempo of ‘Jupiter’ was again perhaps a little lively for some (and it caused a tiny hiatus in the timpani at one point), but the main theme broadened out magnificently. The most stunning performance of the evening was for ‘Saturn’ – the implacable ticking of the clock of life in the harps and flutes was truly chilling, and the brass funeral dirge over the warm pizzicato of the low strings was a magical moment. ‘Uranus’ was busily accomplished (with an impressive shout from full organ), but the quietly rarefied timbres of ‘Neptune’ seemed to flummox the orchestra slightly, and there were some pitching problems, although the off-stage choir (the women of the CBSO Youth Chorus) from the gallery, finished the piece perfectly.

Colin Matthews’ 2000 addition to the suite – ‘Pluto, the Renewer’ – is an ethereal jumble of sounds: plenty of rumbling basses and tinkling glockenspiels that picks up where Neptune left off. The orchestration echoes that of Holst, but somehow a clear theme of its own never quite emerges, and the sense is more of replication than renewal. The performance was excellent, but it still felt like more of an add-on than a true completion.