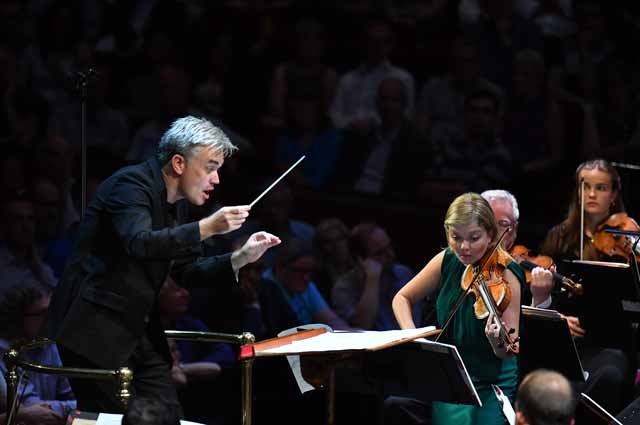 Edward Gardner is clearly ‘King of the Pause’. His ability (doubtless honed by his years as a conductor of opera) to understand the innate drama in an orchestral piece, and to organise dynamic and speed so that this drama is fully realised, is extraordinary; with this comes an understanding that a little silence, a little breathing space, before a new musical idea, can have a tremendous effect – all amply demonstrated on Tuesday evening.

Wagner’s overture to The Flying Dutchman is a concert standard, but it took on new life in Gardner’s hands right from the opening string diminuendo/crescendo, into which the brass chorus inserts itself as the Dutchman appears; one of those special little pauses was introduced before the woodwind entry for Senta’s theme. In general, Gardner carried the Bergen Philharmonic Orchestra with him on the voyage, and there were some nicely observed dynamics (the swell and decay of the horn/trombone ostinato, and the compact blend of the woodwind), but there was a slight feeling of over-generous cornering – a tiny delay in reaction – and a suspicion that Gardner wanted some of the dynamics to be more extreme than they were.

On its southerly visit, the orchestra brought with them the music of their countryman, Rolf Wallin, in the form of a brand new violin concerto, Whirld. For those of us who remembered the Inspector Lewis episode Magnum Opus the alchemical theme of the piece (a symbolic dove flying through the four-stage transformation of massa confusa to The Philosopher’s Stone) made some sense, but the work was otherwise a fairly impenetrable exercise in orchestral textures. Alina Ibragimova took the solo, representing the dove, and gave a dazzling account of the challenging violin part, which ranged from mournful, squeaky glissandi through occasional chirpings, to some mind-bogglingly busy fluttering passages, during which smoke surely rose from the strings. For the rest, the orchestra put in an excellent performance, bringing forth gaseous bubbling woodwind, clinking sleigh-bells, limpid cellos, fruity bassoon explosions, and the busy, overlapping spattering of a pizzicato string section, the whole work ending in a loud coo of a cadenza. The piece is certainly impressive, but its cerebral intensity is not an endearing quality.

Influenced by another southerly journey was Sibelius’ Second Symphony, the early sketches for which were made by the composer on a visit to Italy in 1901. It’s a tremendous work, full of orchestral complexity, half-realised themes (until, of course, the gloriously broad final movement), and possibly representing the last gasp of the ‘great romantic symphony’. Gardner and the Bergen Philharmonic gave it their full attention, turning in a first-rate performance. The orchestra’s early slight unresponsiveness had completely disappeared, and every nuance was directed, understood and performed. There was an earthy peasant feeling to the woodwind sections in the first movement, as well as some text-book string intonation, giving a warm, annealed tone, particularly in the lower passages. The clarinet entry (over quiet timps) in the latter part of the movement was magically imperceptible.

The second movement was perhaps a little on the sluggish side, but some of those characteristic pauses (one particularly just before the entry of the string ‘Christus’ theme) made for interest. A sense of palpable unease marked the opening of the scherzo, but it was soon dispersed by the pastoral feeling evoked by the warm granularity of the winds. As for the final movement, Gardner allowed both of the big themes to shine, and there was some adroit switching into the orchestral ‘knitting’ in between. The quietly whirling woodwind and double basses ensured a well-paced coda, leading to the symphony’s luminous final chords.