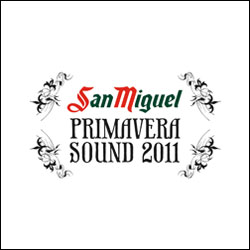 It’s May and there’s a volcano erupting in Iceland. That means it’s time for Spain’s number one alternative music festival, Primavera Sound. And once again the event, with its situation near Barcelona and within the Parc Del Frum site, has come up with a line-up designed to turn heads and make every other festival in the world wallow in inferiority complexes and the turmoil of self-doubt.

The main San Miguel-sponsored stage hosts the biggest of names with acts including Grinderman, The Flaming Lips, Belle & Sebastian and Pulp who will be playing (almost) their first gig since their reformation. Add to that Fleet Foxes and PJ Harvey, who between them have offered up two of the best received albums of 2011, and it’s clear from the most cursory of glances that this year’s festival will be a great one.

But there is so much more depth than that, with various other stages offering up highlight upon highlight to excitable and expectant audiences. The Llevant Stage hosts Public Image Limited, Interpol and a Friday double-bill of 4AD acts The National and Deerhunter. Saturday offers up Warpaint, Mogwai and DJ Shadow.

It’s no surprise to find ATP, who themselves have just completed another excellent festival in Minehead, curated by Animal Collective, lending their name to a stage. The Primavera brand, in many ways, echoes the ATP brand, and you’d expect a lot of staunch ATP-goers to be in Barcelona this weekend. Typically focusing on some of the best emerging experimental talent, their stage offers a reliable and consistent selection. Thursday alone offers Islet, Cults, Caribou, Salem and Factory Floor. Return later in the week for the likes of Low, Shellac, Yuck and Money Mark.

Similarly, Pitchfork also have a branded stage, and have put together a deservingly excellent bunch of acts. Their Thursday line-up reads like a list of some of the best albums of 2010 with Emeralds, Glasser, The Walkmen, Gold Panda and Baths all appearing. However, they have at least one foot in this year with James Blake, Jamie xx, Gang Gang Dance and tUnE-yArDs also scheduled to play.

And as if all that wasn’t enough, Sufjan Stevens, fresh from a European tour that brought him to London’s Royal Festival Hall for two nights of wonder, will be playing sets on Thursday and Friday at the Rockdelux (Auditori) Stage, supported by his long-term supporting act DM Stith.

Primavera is in many ways the perfect festival, set in one of the most vibrant cities in Europe, and with the most exciting of band rosters. This is a city where people stay up partying through the night and siesta in the afternoon if they have to. With sets by Battles, Suuns, Simian Mobile Disco and Kode9 And The Space Ape not scheduled before 3 in the morning, this isn’t the place for those wanting a restful weekend away. But if you want to party with a community of like-minded discerning people who care about what fills their ears, Primavera Sound sets the bar early on in the 2011 festival season, just as it did in 2010, 2009 and every other year since it began.