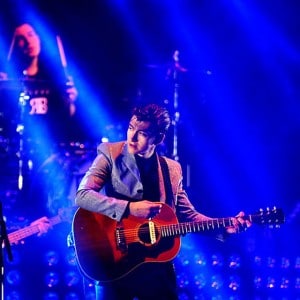 Say what you like about its headliners, the infamous mud, terrible toilets and eye watering ticket price, in terms of line-up, atmosphere, good will and sheer size, Glastonbury is still by far and away the greatest festival this country has to offer. As soon as others try to reproduce elements of its extroverted, bohemian personality, Glastonbury comes back fighting with something even more outlandish to balance out its 43-year-old hippy roots.

But of course there’s always something for cynics to moan about; this year it was the age of the big name acts – were there no newer bands to be booked? Of course, if you looked away from the Pyramid Stage, there was a wealth of exciting young talent to be found in the John Peel tent and The Park, but it seemed the larger the stage, the larger the birthday cake needed for its performers. And, as if to give credence to those who mocked the aged bill, it was those acts that shined.

Even without the Rolling Stones, who attracted the biggest ever Pyramid Stage audience, this was definitely a vintage year for vintage performers.

Portishead’s Friday night headline slot on the Other Stage – while Arctic Monkeys took to the Pyramid and Chic pulled a blinder at West Holts – was surely a highlight for all those who witnessed it. An eerie glimpse at their slim back catalogue – just three albums in almost two decades – their mid 90s output, Sour Times, Roads and Glory Box, got the most vocal reaction, followed by stunned silence for The Rip and Wandering Star. It never felt dated – even the trip hop overlays felt so very now, helped in no small part by a stage backdrop that included a red eyed, demonic image of David Cameron. It was achingly dark – until Beth Gibbons broke the spell with her only words of the night, following closer We Carry On, muttering demurely: “I hope it was ok…”

Earlier on Friday saw Haim reaping the benefit of their BBC Sound of 2013 award, with the first of several appearances throughout the festival – including as Primal Scream’s backing singers – on the Pyramid Stage. The sisters’ cheekiness and enthusiasm was contagious, and they won the early crowd over – with many singing along by the end of Falling – despite a break in the set when Este had to sit down during Go Slow, her diabetes apparently getting the better of her. Over on the West Holts stage, Goat took a while to get going but when they did, it was the perfect soundtrack to a sun-drenched Glastonbury afternoon. Mashing tribal sounds with funk and high pitched, chanted vocals, the crowd was equal parts chin-stroking world music fans and cider-fuelled dancers.

Saturday saw Billy Bragg take a break from curating the Leftfield tent, which continues to combine protest songs with debate led by political heavyweights (topics for discussion this year included The next election, What can we learn from European response to austerity? and Feminism – the unfinished revolution), for an appearance on the Pyramid. With the same easy confidence as when he’s playing to a couple of hundred people in a pub, he revelled in an audience ready and willing to listen to his calls to action. He rattled through a set of old – Sexuality, A New England, Waiting For The Great Leap Forwards – and new – Handman Blues, No One Knows Nothing Anymore – if anyone personifies the earnest, crustier left edges of Glastonbury, it’s Bragg, and he looked perfectly at home.

Over at the John Peel tent, Toy brought their brand of psychedelic post punk to a drifting crowd, while over at West Holts, Canadians BadBadNotGood’s blend of jazz and hiphop played a twisted homage to tracks including a brilliant cover of TNGHT’s Bugg’n.

Elvis Costello’s set was hits heavy. The venom that spilled out of his earlier records may be less poisonous these days, but this afternoon the political slant to the likes of Radio Radio, (I Don’t Want To Go To) Chelsea and Oliver’s Army is felt, and as he closes with a fantastically appropriate version of What’s So Funny ‘Bout Peace, Love and Understanding, his class and professionalism shines through. By contrast, Primal Scream’s Bobby Gillespie cuts a slightly less charismatic figure. Plonked on before the Rolling Stones (Gillespie must surely have been hoping for a headline slot on the Other Stage), they felt like the support act everyone ignores while they’re settling in and getting drinks. They start off ballsy and confrontational but Gillespie quickly slips into an arrogant, blabbering wreck. Haimsave it, with glorious backing vocals for Movin’ On Up but, as Gillespie staggers off saying “Fucking amazing, wasn’t it,” those paying attention are left rolling their eyes.

Mick Jagger turns 70 this month. Seventy years old and headlining Glastonbury! And a two hour long set in front of 100,000 – most of them wearing Rolling Stones t-shirts at that. They started with Jumpin’ Jack Flash and ended with Satisfaction (complete with fireworks and a giant mechanical Phoenix coming to life on top of the stage) via all the hits. Chat was kept to a minimum (save Jagger’s “So, they finally asked us” quip, which prompted many to chip in with “Thanks for lowering your fee!”) but it was clear this wasn’t just another gig for them, as Mick proudly unveiled a reworking of Factory Girl, re-Christened Glastonbury Girl with lyrics paying tribute to the festival. Call them sell outs, call them irrelevant…but there’s never been a band who united a festival like them.

If Saturday brought Glastonbury together, Sunday encouraged it to scatter. Stealing Sheep took their album, Into The Diamond Sun, to the Park for a well-received trip into light psychedelic indie, before a pop-triple whammy of Tom Odell, Jessie Ware and Laura Mvula. Vampire Weekend’s preppy afro-pop got the crowd moving; singer Ezra Koenig visibly more relaxed than their last outing further down the bill at Glastonbury a few years back. It’s easy to imagine that a decade ago they’d have been pitched in West Holts, but as first album favourites A-Punk and Walcott burst out the stage, there’s a sense of quiet satisfaction that they made this far.

Nick Cave & The Bad Seeds might seem an odd choice for the penultimate band on the Pyramid but, in keeping with the rest of the over 50s, they smashed it. Those here early for Mumford And Sons looked genuinely quite stunned as an on form Cave strutted across the stage, pouring heart and bile into a set that was at times almost unsettling and always intense. The show’s highlight came courtesy of one such young thing who, propped up on someone’s shoulders, stared out a mid-crowd Cave during Stagger Lee with a look so compelling it was hard to tell if he was going to seduce her or sacrifice her; the crowd, via the big screens, was captivated. Set closer Red Right Hand only served to make Mumford And Sons’ set feel even more of a cop out.

Competition for last act of the festival was steep, with Mumford And Sons, The xx, Phoenix, Cat Power and Bobby Womack all vying for attention. Nothing was ever going to top the Stones’ set from the night before, and the singalong to The Beatles’ A Little Help From My Friends, which closed Mumford And Sons’ set, felt anti-climactic. Good then, that it needn’t have been the end.

Amongst the trippy seediness of Shangri-La, the apocalyptic chaos of Block 9, the tranquility of the Green Fields and the bonkersness of the circus and cabaret areas, the parties continued well into the next day… and the Glastonbury hangovers well into the next week.