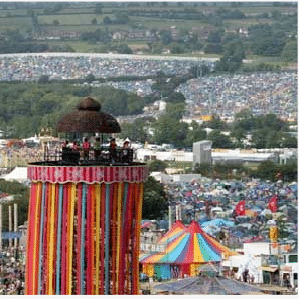 In the second installment of musicOMH’s festivals guide 2013 (read part one on City Festivals here), we look at the multi-day events. The ones you dust your tent and wellies down for, and the ones that see us either swelt in tropical heat or go prune-like in a downpour.

Whatever the weather, these are the festivals that no one dayers or European trips can compete with; for music fans they’re a rite of passage. We’ve picked out eight of our favourites.

Seen by many as the ultimate festival, Glastonbury’s back after a break in 2012. This year’s headliners raised a few eyebrows but, to coin that oft-used cliché – there’s so much more to Glastonbury than just the music. Indeed, it sells out every year before a single band has been announced. From Reiki in the green fields to dancing with robots in Shangri La, you could easily go the whole weekend without venturing anywhere near the many, many stages.
When: 28-30 June
Where: Worthy Farm, Pilton
Who: The Rolling Stones, Mumford And Sons, Arctic Monkeys, Vampire Weekend, Primal Scream
Why: It still manages to retain some of the hedonistic spirit of yore; there’s no such thing as ‘closing time’, so it’s a nonstop party.
Find out more: glastonburyfestivals.co.uk

Undoubtedly this year’s best line-up, End Of The Road is the dark horse of the festival circuit. It launched in 2006 without much fuss and has quickly grown into something rather special, balancing a small festival feel with some impressive acts, as well as comedy and cinema.
When: 30 August-1 September
Where: Larmer Tree Gardens, North Dorset
Who: Sigur Rós, Belle and Sebastian, David Byrne and St Vincent, Eels, Dinosaur Jnr
Why: Its brilliant line-up.
Find out more: endoftheroadfestival.com

Since Peter Gabriel, Thomas Brooman and Bob Hooton organised the first Womad in 1982 it’s become a reference point for all things world music. It’s very family friendly, and if you want a break from the music there’s plenty of workshops to get involved in…and even a spa, where you can treat yourself to a wood-fired yurt sauna.
When: 25-28 July
Where: Charlton Park, Malmesbury, Wiltshire
Who: Seun Kuti & Egypt 80, Toots and The Maytals, The Heavy, Parov Stelar Band, David Rodigan, Jesca Hoop
Why: The country’s biggest world music festival
Find out more: womad.org

Rob da Bank and his wife Josie were inspired by a trip to Glastonbury and launched his interpretation of a festival in 2004. One of the first ‘boutique’ festivals, it now attracts a 50,000-strong young, hip crowd, and still encourages outlandish fancy dress amongst an increasingly high profile bill.
When: 5-8 September
Where: Robin Hill Country Park, Isle of Wight
Who: Elton John, Snoop Dogg, Belle and Sebastian, Franz Ferdinand, MIA
Why: It’s the perfect opportunity to show off your fanciest fancy dress
Find out more: bestival.net

The country’s most influential folk festival has been going since 1964 and still attracts some of the biggest new acts, as well as the slightly crustier ones. Set in a beautiful park with on and off site camping available, it makes for a relaxing camping holiday, while crowds are manageable and it’s never too hard to get a good spot. Stick around for the late night sing-alongs – the audience bring nearly as many instruments as those on stage.
When: 25-29 July
Where: Cherry Hinton Park, Cambridge
Who: Thursday – Lucy Rose, Willy Mason, Marika Hackman
Friday – Bellowhead, Levellers, Sam Lee and Friends, Emily Barker and The Red Clay Halo
Saturday – The Mavericks, KT Tunstall, Shelby Lynne, Thea Gilmore
Sunday – The Waterboys, Capercaillie, Martin Simpson, Martin Carthy and Dave Swarbrick, The Staves
Why: A real cross-generational festival, with some hardcore folkies who know how to have a good time.
Find out more: cambridgefolkfestival.co.uk

Latitude succeeds where many have tried and failed; bringing together a cross section of the arts and attracting a great line-up across the board. As well as a satisfying musical line-up, there’s some great comedians and literary acts planned and you couldn’t ask for a nicer setting. It attracts a mixed crowd and has been getting bigger and busier in recent years.
When: 18-21 July
Where: Henham Park, Southwold, Suffolk
Who: Bloc Party, Kraftwerk, Foals, Grizzly Bear, Yeah Yeah Yeahs, Yo La Tengo, Hot Chip, Cat Power, John Grant, Beach House, Modest Mouse, Sean Locke, Dylan Moran, Marcus Brigstocke, Tim Key, Nick Mulvey
Why: Theatre, comedy, dance, book readings, film screenings and music all at one festival
Find out more: latitudefestival.com

Set in the Brecon Beacons, this decade-old festival is one of the more family-friendly events, but not at the expense of a decent line-up. If you want to make a week out of it, you can buy tickets for a seven day break to enjoy the Welsh countryside.
When: 15-18 August
Where: The Black Mountains, Wales
Who: Band of Horses, Midlake, Low, The Horrors, Ben Howard, John Cale, Edwyn Collins, Veronica Falls, Archie Bronson Outfit, Fuckbuttons
Why: The gorgeous scenery
Find out more: greenman.net

One of the summer’s more unusual festival venues, the Midland Railway heritage centre is taken over by swarms of cardigcan-clad indie kids for a few days every summer. Bands play in sheds and on steam trains, while craft workshops and real ale bars offer a distraction with views of the beautiful Derbyshire countryside. Off-site camping is a 20-minute walk away, where the party carries on into the night with an indie disco tent.
When: 26-28 July
Where: Swanwick Junction, Midland Railway Centre, Butterley
Who: Camera Obscura, The Pastels, Bis, Helen Love, Haiku Salut, Milky Wimpshake, Martha, The Wave Pictures, The Lovely Eggs
Why: Drinks on an 1950s train carriage? Trips up and down the track on a steam train? Dancing in a train shed? It’s train-tastic.
Find out more: www.indietracks.co.uk