Moby: “As a musician, you’re free to do whatever you want” – Interview 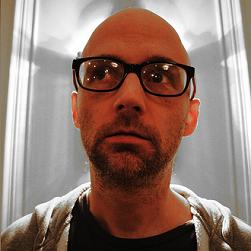 “Sometimes I really wonder why the CIA hasn’t tried to recruit me, because it would be the best cover for a travelling agent!”

Moby is talking about his recent tour activities, which have seen him performing in Germany, Belgium and Spain on the three days prior to this, a third visit to the Roundhouse in six weeks. He’s happy to be back, though his first visit raised a few eyebrows.

“The first time was really weird. It was the Mute festival. I was on Mute from 1992 until just recently, and am still on there in the States, and when Daniel Miller was putting it together he asked me to DJ. It was a bit of a stretch, because it was a very industrial night, there were a lot of very earnest Eastern Europeans who were there to see Laibach and Nitzer Ebb, and there was me in between playing disco records!”

Destroyed, his new album, paints a picture of a city in the nocturnal hours. Cities are Moby’s natural habitat. “I was born in New York, but I live in LA now, and I’ve spent almost all of my adult life hanging out in cities. A lot of it is that they’re really practical places. One of the reasons I stayed in New York so long was because I knew how everything worked, and if I wanted to go out and buy organic broccoli I knew how to do it. It’s the convenience more than everything else, but what I learned over time was that I like cities most when people are asleep. And that’s what formed the making of this record, the experience of being in a hotel by myself at 4 o’clock in the morning, on a Tuesday, looking out the window. It seems that everybody else in the city is either gone or asleep, and then when people start to wake up it’s a little disappointing. There’s something very calm, tranquil and comforting before that time.”

“Because no-one really buys records now, as a musician you’re free to do whatever you want” – Moby

More than ever, Moby feels the opportunity to make his own music. “Because no-one really buys records now, as a musician you’re free to do whatever you want. In the old days there was always that voice in the back of your head saying, “I wonder if it’s gonna sell”, and now you don’t have to think about it. The only reason anybody should make an album now is because they love making albums. When I was growing up albums were my best friends, and I spent more time with them than with any of the humans that I knew. So now that’s sort of what I want to spend the rest of my life doing, making albums – even if no-one is willing to listen to them.”

Over the last few years he has given up alcohol, an aspect of his life he felt was out of control. Has it changed his way of thinking? “It has,” he says hesitantly, before picking up the thread, “in a lot of ways. One of the things I loved about drinking was it was so quick and so effective, and so when I was drinking a lot I became really attached to the idea of quick fixes, because I constantly had access to this thing that worked in an instant. By removing that from my life it forces me to not be involved in the process of immediate gratification, and I think that’s healthier. That affects the creation of music in that it makes me a lot more calm, so I think it’s good. The end result is probably music that’s more experimental and atmospheric, and probably less commercial, but that’s OK.”

Does the strand of punk running through his music remain? “I hope so. Last night we were playing a festival in Belgium, in front of about 25,000 people, and in the middle of it I decided to do a stripped down acoustic version of a song we’d never played before. So I had to teach the band how to play it on stage. So that was either self-involvement or punk rock, or a combination of the two!”

Later at the Roundhouse gig he performs the same feat, bringing out That’s When I Reach For My Revolver for a rare airing. Is it the instinctive element of punk that he likes, being able to challenge himself? “For me the punk rock ethos was the celebratory emotional quality of it. So many of my favourite punk rock records are exuberant and celebratory, even if they’re dark. Black Flag’s Damage is a depressing record, but it’s a celebration of bleakness and depression. So it’s the emotional quality of punk rock, and the irreverence of it. There’s so many things that collectively we take quite seriously that really are not worthy of that. So I hope I’ve held on to that, and I closely guard those two aspects of it.”

“What I find is that even in America most people aren’t interested in talking about politics, but that it makes a very good spectator sport” – Moby

Moby has a reputation as a straight talking interviewee, so it’s an ideal opportunity to get his opinion on the US debt crisis. “I could spend the next two hours talking about American politics. What I find is that even in America most people aren’t interested in talking about politics, but that it makes a very good spectator sport. Especially the Tea Party, where you’ve got an extreme, insane fringe of the Republican right wing – the Sarah Palins, Michelle Bachmanns and Eric Cantors of this world – they’re insane!”

There is a plus side, however. “The great thing about this debt ceiling crisis is that it’s made a lot of mainstream republicans in the States wake up and realise how insanely irresponsible the Tea Party and the far right are. Even the Wall Street Journal had an op-ed piece saying basically this current crop of Republicans aren’t fit to govern. That page is as far to the right as you can go.”

He talks with passion but also with an emotion approaching embarrassment. “Watching these Republicans essentially hold the world’s economy hostage for some arbitrary ideological position, they’re willing to watch the world’s economy go down the toilet so they don’t go back on the idea of no new taxes. It’s insane, and I hope the powers that be finally realise these Tea Party lunatics are just not fit to govern.”

And what of the reaction to the crisis in Europe, has he picked up much in the last few days of touring? “What’s really interesting in many countries like the UK, Spain, Portugal, Ireland and Greece, is this idea of austerity measures, cutting back on public spending, and forcing that on people. What’s happening in the States is the exact opposite – the Tea Party want austerity. So it’s really interesting these two things happening at the same time, and they’re both kind of wrong!”

“I realised the only songs on the album that excited me were the strange experimental ones on the second half of the record” – Moby re-evaluates Play, 10 years on

We return to talking about music – and an observation that some of the music in Destroyed has its roots in the Ambient album of 1993. He agrees, but does he think there is a common thread running through his music? “I think so, but I have no objectivity as regards me or the music that I make. I know I like some of it, and I don’t like some of it.”

In fact it appears his biggest music is not switching him on anymore. “I did a thing with Rolling Stone recently, where they wanted to do an article on ten years after the release of Play. That’s ironic because they didn’t review it when it came out! So we’re going track by track through the album, and I realised the only songs on the album that excited me were the strange experimental ones on the second half of the record. So clearly I have no objectivity regarding my own music, though as far as seeing a common thread that runs through it, I don’t know.”

Would he say that another early album, 1994’s Everything Is Wrong, was prophetic of the current world climate and could be even more relevant today? “That’s kind of you to say,” he responds. “I think the eclecticism of it is prophetic – I mean it’s a record that has some classical music on it, some ballads, some punk rock, and some rave anthems. That over the top eclecticism to an extent accidentally pre-saged the eclecticism of this millennium.”

“There was a time when people would define themselves through a very narrow musical orientation, and I had friends who listened to only heavy metal, only punk rock, only jazz. Now I don’t know anybody like that. I think a lot of it is the result of shuffle. Having an album was such an investment, and you’d listen to one radio station only. Now people put iTunes, Pandora, Rhapsody or Spotify on shuffle and all of a sudden there are these pieces of music from disparate genres. I think it’s made eclecticism more common in a very healthy way. In the early ’80s there was such a divide between electronic music and rock music. Rock musicians hated synthesizers and drum machines, but now they use what’s available, and I see that as being really healthy.”

Moby’s album Destroyed in out now through Little Idiot.

More on Moby
Moby – All Visible Objects
Moby – Everything Was Beautiful And Nothing Hurt
Moby & The Void Pacific Choir – These Systems Are Failing
Moby – Innocents
Moby: “As a musician, you’re free to do whatever you want” – Interview