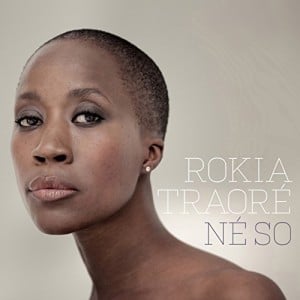 With a 20-year recording career and a plethora of other achievements ranging from selling out London’s Barbican three nights in a row to being selected for the main jury at the Cannes Film Festival, Rokia Traoré has undoubtedly become African musical royalty, with a presence and influence that extends significantly beyond the continent of her birth.

The daughter of a Malian diplomat who travelled widely outside her home country as a child, Traoré has always been a more cosmopolitan figure than many of her contemporaries, clearly as at ease in Europe as in Africa. Yet she has never forgotten the culture and character of her native land and, on her new album Né So, the dreadful atrocities Mali has endured in recent years – a brutal civil war and the barbaric cruelties of Islamic fundamentalism – have clearly had a major influence on Traoré’s songs and sound.

While her last album, 2013’s Beautiful Africa, was largely sunny and upbeat, although not without its more personal content, Né So is altogether moodier and darker, with a palpable senses of nostalgia, suffering and yearning throughout. Singing in French, English and her own Bambara tongue, Traoré’s silky, versatile voice remains as central to her records as ever. Wonderfully dexterous, textured and soulful, it eschews diva theatrics to maintain a graceful, expressive poise throughout Né So. Musically, the Western rock influences have arguably been toned down a little since Beautiful Africa, with traditional instruments more to the fore, played by musicians hailing from across West Africa, although other names from Traoré’s impressive contact book, for example ex-Led Zeppelin bassist John Paul Jones, also appear.

Produced with an intimate clarity by John Parish, the sinuous guitar lines and gently rolling percussion provide a sparse yet warm backdrop to Traoré’s often sad songs, which tell tales of uprooted peoples, uncertain futures and (on Kolokani) the singer’s own reminiscences of her home town. It’s all very listenable for sure, with Traoré’s vocals particularly impressive on the whispered, sultry Amour, yet there is also a nagging sense of an artist in cruise control, with several tracks ambling pleasantly by and blending into one another without ever really engaging.

It’s only in the last three songs that Né So really springs to life and grabs the listener by the scruff of the neck. Those fortunate enough to have seen Traoré’s electric live performances will already be aware of her spellbinding rendition of Billie Holiday’s Strange Fruit, and it’s no less compelling on record, with the Malian squeezing every last drop of pain from the lyrics before a delicate n’goni solo closes the song with a deliciously subtle African twist. The title track – featuring spoken word contributions from alt-folk luminary Devendra Banhart – is a restrained but powerful reflection on the refugee crisis, while Sé Dan, sang in breathy, accented English, is a paean to global harmony that brings the album to an energetic, positive close.

Né So is another accomplished album by a singer-songwriter who has utterly mastered her craft, but one is also left with a feeling that Traoré still has more left in the tank then what she’s delivering here. Nevertheless, she remains one of Africa’s most vital voices, an important ambassador for a country in turmoil, and this record will undoubtedly enhance her standing further.