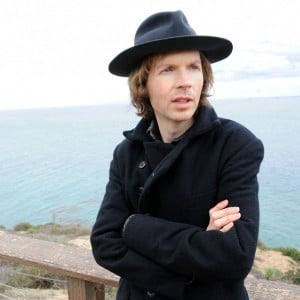 Whatever criticisms he’s faced recently you could never accuse Beck of being predictable. Who would have thought, for example, that after Odelay would come a whimsical folksy album such as Mutations? Or that after Mutations would come a Motown/funk inspired album like Midnite Vultures? Or even that that album would then be followed by such a downtempo, folk-country affair as Sea Changes? The man is a veritable chameleon, trying out different musical styles, to varying degrees of success, like a different suit for each day of the week.

So which way has he gone with new album Guero then? Well, it’s being touted by some as being a return to the days of Odelay, albeit because he’s teamed up with the Dust Brothers on production dutiesagain. There seems to be an acknowledgement of this tonight; in a set principally populated by tracks from the new album there are two Odelay favourites – Where It’s At and Devil’s Haircut – which fit snugly intothe new setlist.

From the airing we’re given tonight, it sounds like Guero is verymuch Beck exploring his fascination with hip hop, with the emphasis very much on the old school. The new songs reveal a firm nod towards pioneers like Grandmaster Flash and Beck’s rapping is grounded in a style reminiscent of Grandmaster Melle Mel (albeit through Beck’s slightly skewed take on it). Vintage synth noises are fused with funk percussion and occasional scratching by Beck himself when the mood takes him. It’s all very much about groove and rhythm – various handshakers and maracas feature heavily throughout the gig and openingtrack, Black Tambourine uses two drummers.

Speaking of maracas – the old school sound was complimented by oneof his band members (Beck’s Bez, if you like) providing some robotics and body popping-style dance moves. I must admit I laughed out loudwhen he first started – but that was mainly because he looks a little like Dave Stewart in his white plastic shades, white anorak and white jeans. Once I’d leapt that hurdle he became the coolest person inthe room.

Beck, however, wasn’t having a great time of it. The occasion being a low-key, (not-so) secret gig to preview his new record, he seemed to be constantly fiddling with his vocal levels, and confessed at onepoint to being jet-lagged. By the encore, when his microphone escaped him just as he was about to launch into the next verse, he was looking pretty pissed off, and stomped off stage before the song ended, never to return.

Still, if he manages to be this good on a bad night, he’s not got much to worry about. The slight air of chaos didn’t do the gig any harm at all. Beck has an impressive knack of making all his creations sound like the result of a haphazard experiment gone right, and tonight was no different. He may be unpredictable, but whatever he does you know you’re always going to get something worth listening to.