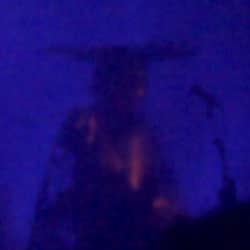 Dry ice gushes upwards, up, up through a dimly lit monk’s cowl, the garment held in place by the hidden frame of the presumed wraith within. He aims his sleeve towards the assembled brethren, directing out dry ice as a visual imperative wherever he points. In the enveloping darkness, no supporting limb is apparent.

The wraith might’ve recently steered his fearsome nazgul to Tuva, the better to learn how to vocalize several notes simultaneously from Huun-Huur-Tu‘s throat singing overlord Kaigal-ool Khovalyg, before offering his steed a couple of Gengis Khan’s descendants to chew on.

As the dry ice emits from every opening of his cowl, it’s this overtone technique he employs to menacingly convey a message of time-straddled inner torment, of plans for retribution, of matters other, above and beyond the petty human concerns occupying the now enslaved minds of the fashion challenged arrayed before him.

Lurking around the wraith, a Hungarian known to his fellow undead as Sunn O)))‘s on-off front man Attila Csihar, other figures strike poses in cowls, with guitars, a trombone and unidentifiable electronica occasionally forming out of the dry ice before just as quickly disappearing back into boundless darkness. Together they make ear-splitting noise so loud that it transcends volume. Instead it soothes, takes on internal rhythms and redistributes vital organs to places they’d never been intended for.

Crushing, dictatorial guitar drones call to mind the tripod horns from War Of The Worlds; demands for attention, these huge sounds anchor a subtler melodic progression of moods, both communal and singular, that ebb and flow like feelings and fears. Sunn O)))’s album Monoliths & Dimensions is comprised of just four tracks, the shortest of which, Big Church (Megszentsgtelenthetetlensgeskedseitekrt), clocks in at a little under 10 minutes. These demands for attention are not of the pop kind.

Core Sunn O))) originators Stephen O’Malley and Greg Anderson may well be among these shadowy figures, these high priests of darkness, but neither they nor their accomplices can divert attention away from Attila’s next costume. The cowl is overlaid with a suit of reflective shards, topped by a crown to match, while laser gloves direct beams of blood red around the room, at will selecting victims while giving Grace Jones a run for her money in the costume stakes. Malevolently camp and, amid the dry ice, unphotographable, this shapeshifting nightmare vision of an all-powerful interstellar emperor burns into brains just as devastatingly as the staggeringly heavy guitar notes vibrate adams apples, tremble thunder thighs and cause chipped teeth to chatter.

Some gigs create memories through imagery, the musicians completely understanding that the live music experience is as much about theatre as it is about sound balance or the ratio of old songs played to new. Like The Knife‘s live shows, whose black alleyways of the soul also invite trepidatory exploration, Sunn O))) with Attila at their helm are masters of theatre in much the same way they are overlords of their boneshaking doom-drone sound. If this monumental experience were a mere gig, it would be gig of the year.