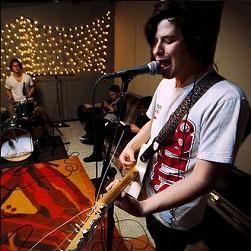 Given the past 18 months it’s a small miracle that Nathan Williams, Mr Best Coast and frontman of Wavves, is still getting gigs and has a touring band at all.

Back in May 2009 he experienced a now infamous meltdown onstage at the Primavera Sound festival, which was later blamed on drugs and exhaustion. Not just isolating his fans in the process, his drummer walked out on him hours later, leaving Williams facing a cancelled European tour. Rumours were rife about Williams’ health and any new Wavves material seemed unlikely.

But somehow, the doubters have been silenced. Wavves bounced back in the first half of this year with a new three-piece line-up (featuring Billy Hayes and Stephen Pope, formally in the late Jay Reatard‘s band) and a third LP, King Of The Beach. The record is a searing collection of fun indie gems and features refreshingly honest lyrics from Williams about the traumas of recent events.

Tonight’s Garage gig, then, could almost be described as a comeback. The youthful and very enthusiastic audience fill the front half of the venue, with a sweaty moshpit throughout proceedings, and the band seem in jovial mood. When bandmates Hayes and Pope pass comment on Williams taking so long to tune up, it’s clearly in jest, and not the tension-filled drama of days yonder. Further pleas for the crowd to supply them with marijuana only further the relaxed ambience.

It’s incredibly loud, too, so much so that the vocals barely get a hope of a look in as distortion fills the newly refurbished venue. The set’s highlight, once it’s wrestled through the venue’s ropey sound, is Idiot, a half-apology, half-kiss-my-ass statement to the naysayers (“I could say I’m sorry but it wouldn’t mean shit”). Old favourite So Bored, still sounding like an out-take from Nevermind, shows Williams almost channelling Frank Black levels of screaming.

There have been claims that the band’s sound treads too closely to a Blink 182-lite nature (the title track of the new album being a case in point), but the intelligence in Williams’ lyrics and the lack of songs about girls taking their clothes off underline it.

Forty minutes later, sans encore, and the show grinds to an abrupt halt. A few hundred teenagers leave sweatier and in jovial spirits, and a band once almost on the brink proves to be in fighting form.