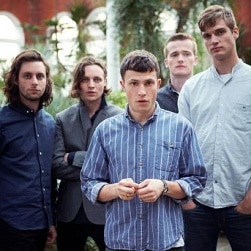 What better way to start the year than to release a new album? Even better if said album has been hailed by most of its critics as the one to take your band to a higher level. The Maccabees guitarist Hugo White is in no doubt; making Given To The Wild, the band’s third album was massively labour intensive.

White describes 2012 for him and bandmates Orlando Weeks, brother Felix White, Rupert Jarvis and Sam Doyle so far as “easing in. We’ve started rehearsals for touring, but it’s quite odd thinking that the record’s out now. It’s been a long two years, and at points felt like it would never happen. The key to the whole thing has been persistence and dedication. The whole thing, musically, feels like it a natural cause of that happening, and for the first time it’s felt like people are really getting behind it.”

White feels the Maccabees’ personality has come through more fully on Given To The Wild. “Yeah, I think so. With the first record Colour It In we were really just learning, we weren’t technically great musicians. Wall Of Arms was a step on from that as a complete piece, but now we’ve reached a place of achieving what you want and making it a reality. Part of that was the production, which this time was predominantly us. The vision is ours, and that’s something we never could have done before.”

Communication within the band is direct and free. “A lot of our process of writing is done through arguments; it’s the way we work. It’s collaborative between all members. We have different strengths and work in different ways. The process of writing was four months of individual writing, so we weren’t together as much. This time we tried to let everyone have space and form ideas alone or in pairs, so when you brought it together it worked, and good ideas formed.”

To help them on their way the band recruited DFA producer Tim Goldsworthy. “It was May last year when we got in contact and had it all set up,” recalls White. Initially he stood out as being from a very different background – he’s a sound man.” The emphasis on the word ‘sound’ is notable. “He was a really intriguing guy to work with, and he brought loads of toys at the studio that we’d never used before. We worked with him and Bruno Ellingham for three weeks, and then after that session we realised the only way was to finish it ourselves, so we spent another three, four months in our studio getting it finished. Ultimately it was a realisation of ‘we’re gonna do this’, because by then we had such a strong vision of what we wanted to do.”

The mention of Goldsworthy’s ‘toys’ is intriguing. “There was this thing called a drone commander,” he recalls, “which not many people seem to know about it. It’s a little box that creates drones and you mess with them. It has some odd sounds that we used on the intros to a lot of the songs, and then on For A Child there’s a reactor synth which runs by itself, you set it up and let it go. It runs through the whole song, it doesn’t change with the music, it’s always there.”

“I definitely hit barriers of musical overload, and felt I was getting to a point where my brain couldn’t handle it” – The Maccabees’ Hugo White

The intensity with which White talks betrays the amount the band put in to the album emotionally. “The writing is intense,” he agrees, “but it’s also nice because you’re at home living more of a normal life as opposed to touring. We weren’t forcing it, but we were still writing as much as we could. The last session was 15 hour days in the studio, every day of the week, for quite a long time. I definitely hit barriers of musical overload, and felt I was getting to a point where my brain couldn’t handle it. We aimed for a September release but realised we’d missed that deadline, hence why the album is coming out now!”

With a bigger sound at their disposal, does this mean the Maccabees are now aiming for bigger sized audiences? “We see the band as progressing,” White answers emphatically. We’ve been in it for eight years now, and it’s drawing more people in. We want to continue doing that, because we feel like there’s more in this. If more people want to see us play that’s great, but we’ll see what happens. You can hear a conscious effort on the part of some bands to play to stadiums and bigger venues, but not with us. It could have gone either way to be honest.”

As to releasing a record at the start of the year, White agrees that “we’ve never done that before – but it feels good. We start touring the record soon, and we’re doing the UK, then Europe, then the UK again, then Australia and then the US. That pretty much takes us up to festival time, and we want to do as many as a band can do. We’re really up for it, and why not? It’s a long thing but you’ve got to take it day by day, because you just end up freaking out otherwise.”

Soon it will be time for White to leave the seagulls of Brighton, which have consistent input in to our conversation, and head back to London to rejoin the band. In a year which could make the Maccabees, he sounds completely up for it.

The Maccabees’s Given To The Wild is out now through Fiction, featuring the single Pelican. The band begin an eight day tour of the UK on 21st January at Sheffield’s Leadmill. More info on themaccabees.co.uk.