by Ben Hogwood
published: 10 May 2019 in Album Reviews
Tweet 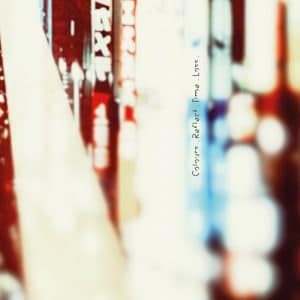 James Chapman is like a kid in a sweetshop. For his fourth album as Maps, the first since 2013, he has acquired the keys to an orchestra, Brussels ensemble The Echo Collective. Together with percussionists and a number of guest vocalists, he has seized the opportunity to realise his already expansive electronic work in the course of this wonderfully organic album.

As its title implies, Colours. Reflect. Time. Loss. is an account of life in the intervening six years since most recent album Vicissitude. It appears to have been something of a big dipper for Chapman, and in the course of its making, loss would appear to be the defining word of the four. The music is shot through with longing, but the response is far from maudlin, with exquisitely judged changes of harmony bringing refreshing bursts of positivity. The music often swoons, with lyrics that hint at dark clouds on the horizon, but there is strength from within, each of the songs baring its soul while ultimately triumphing over adversity.

The orchestra play a big part in this, their beautifully scored contributions adding further weight to the already substantial sound. Each of the first three songs benefits from their contribution, the sound swelling in their closing moments as the stately chord progressions reveal their full power. The solemn chords with which the album begins suggest the reverberation of a cathedral, with Chapman’s breathy intonations taking place up the other end of the building. On headphones it is a sonic treat.

While the contributions of the Cobalt Chapel band members are valuable, Chapman’s own thoughts are defining, hazy in outline but easy to follow and clearly borne of first-hand experience. The album’s centrepiece Just Reflecting is a gorgeous piece of music, its closing loop one of those portions of music you could lose yourself in for a good half an hour. It pulls on the heartstrings as the album’s principal emotion, nostalgia, takes hold. Sophia becomes a drawn-out meditation, the lyrics given in a long-breathed sigh. Sophia is “still waiting, still chasing a feeling”, the violins soaring in response. Meanwhile The Start Of The Plans We Made is also full of sepia-tinted reflections, Chapman reflecting on how “we were losing ourselves for days”, but again the music harnesses a powerful and lasting response.

It made complete sense for the music of Maps to expand into orchestral form, and the key to its success would always be keeping the blend of vocal intimacy and instrumental heft that has been Chapman’s calling card in previous albums. Colours. Reflect. Time. Loss. achieves its aim handsomely, with many a moment to stop the heart of its listener, in doing so adding another dimension to Maps as a musical outfit.