by Neil Dowden
published: 24 May 2019 in Album Reviews
Tweet 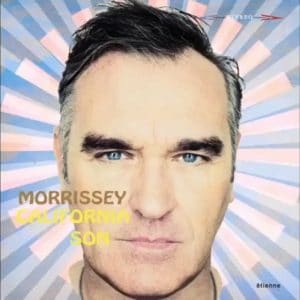 With his continuing controversial comments that seem to indicate support for far right and Islamophobic political parties, it’s a relief that Morrissey’s new album contains none of his own words. His first covers album, California Son, features versions of a diverse range of songs from the ’60s and ’70s by North American musicians whom Morrissey admires. Evidently they have been selected to showcase his vocal range. But for someone who writes such personal, often autobiographical lyrics himself, it’s not clear if Morrissey is sometimes trying to deliver a message here by proxy.

He should be given credit for his quirky choice of often not so familiar songs (or even sometimes artists), to which he brings his own distinctive baritone phrasing. However, there are a number of guest singers here who don’t make much of an impact. And the production by Joe Chiccarelli (who has helmed Morrissey’s last two albums) is bold in its use of different arrangements from the originals, but by no means always subtle with a tendency towards overkill.

The opener, Morning Starship, is by someone whom Morrissey has championed before: Jobriath, “the American Bowie” who had a short-lived career in the early seventies as a flamboyant glam-rock performer (and was the first openly gay pop musician to be signed to a major record label). It has echoey spaces and electronic sci-fi effects like the original though the sound is less artful whimsy and more shiny pop, with Morrissey lifting off with his falsetto. Grizzly Bear’s Ed Droste is lost somewhere in the mix on backing vocals.

Don’t Interrupt The Sorrow is a Joni Mitchell track from her free-flowing, jazzy period in the seventies – with Morrissey in laid-back mode, this shorter version features meandering saxophone solos that work quite well.

Only A Pawn In Their Game is a Bob Dylan protest song from his classic 1964 Times Are A- Changin’ album about the assassination of civil rights activist Medgar Evers. It has to be said that the anti-racist lyric in which the “poor white man” is manipulated by dark forces sits uncomfortably with some of Morrissey’s recent utterances on ethnic minorities and immigration – though perhaps he is attempting to show he is not a bigot. But with the stripped-back acoustic solo guitar replaced by folksy accordion and military-style drumbeat, simplicity gives way to bombast.

Suffer The Little Children (not to be confused with The Smiths’ Suffer Little Children about the Moors murders), by the indigenous Canadian-American folk singer Buffy Sainte-Marie, is about the stultifying effects of conventional conformist education. This time menacing brass and syncopated piano are used instead of the original’s acoustic guitar. And there is further counter-cultural protest with Philip Ochs’ Days Of Decision, with a more restrained production suiting the song better.

The album’s subject-matter changes from political injustice to unrequited love with Roy Orbison’s It’s Over, the most famous song on the album. Morrissey impressively stretches his vocal cords to the maximum without matching Orbison’s operatic vibrato, but strings add drama and there are effective vocal harmonies from American singer-songwriter LP.

The single Wedding Bell Blues (by Laura Nyro) is a slice of polished kitsch, with Green Day’s Billie Joe Armstrong blandly backing Morrissey’s high camp. The easy listening continues with Morrissey crooning on Bacharach and David’s Loneliness Remembers What Happiness Forgets, which lacks the bittersweet charm of the original version sung by Dionne Warwick. On Lady Willpower (the Jerry Fuller hit for Gary Puckett & The Union Gap) the power is turned up with horns blasting and Morrissey out of his comfort zone in “going big”. In Carly Simon’s When You Close Your Eyes, the sense of swooning delicacy Morrissey conveys is ruined by crashing drums.

A much shortened version of Tim Hardin’s Lenny’s Tune, an elegiac piano ballad about the suicide of US comedian Lenny Bruce, is sensitively done with the addition of sepulchral double bass a nice touch. In closer Some Say (I Got Devil), added trumpet intro and staccato strings, with a cacophonous central section, melodramatise Melanie’s dreamy song of self-contemplation. Maybe the dichotomy of the lines “Some say I got devil / Some say I got angel” is a nod to the love/hate reaction that Morrissey provokes these days.

Morrissey joins a long line of successful singer-songwriters (going back to the likes of Bryan Ferry, David Bowie and John Lennon) who have wanted to pay tribute to various artists who have helped shape them as musicians by recording albums of their songs. California Son does not rank among the better examples, but Morrissey does make the songs his own while generally staying true to their spirit. He is in great vocal form on this album. It’s just a shame some of the things he voices on- and off-record elsewhere are nowhere near so harmonious.