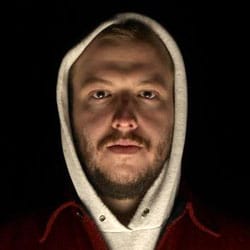 Maybe you’ve somehow yet to hear Bon Iver’s debut album For Emma, Forever Ago. But chances are you may still know of it whether you have or not, for the legend of its gestation precedes it.

At the end of a relationship, Justin Vernon’s heart was broken. So off he headed to the quietude of a cabin in the wilds of Wisconsin to shoot and eat some unfortunate animals and write some songs about his feelings.

Since then his life has changed beyond recognition. Landing in the upper reaches of end of year polls (including ours), the year’s best break-up album For Emma, Forever Ago has been one of 2008’s biggest word-of-mouth hits.

At the end of this gig, with scraggled, dusty blond hair and dressed in jeans and a checked shirt like a surfer forced to model for Gap, Vernon gazed out from beneath a dragon at 2,200 avid admirers – soul mates, possibly, for everyone had their heart broken at least once, surely? – and drank in the scale of his achievement.

The dragon preceded him, of course. We’re in the Apollo Victoria, a gorgeously art deco theatre in central London whose day job is hosting the musical Wicked. The set of said show is largely intact, lending the evening a uniquely incongruous air with Bon Iver’s backdrop made up of cogs, wheels, a stage-wide colour screen and, high above, that fire-breather. Will it swoop down on us as Vernon croons Flume?

Talking of Flume, one of that intimate record’s most intimate tracks, how would it work in a space of this size? musicOMH last caught Bon Iver in the Spiegel Tent, a venue space that suited the acoustic nature of Vernon’s music to a tee. Surely in a place this big it’d get lost – or burned to cinders?

He’d soon answer our questions with a cranked-up multi-instrumentalist set-up that underlined the quality of his songwriting by throwing up the prospect that for Bon Iver, loud is the new quiet. The record is barely half an hour long, but what followed proved Vernon’s material is expandable and pliable. As such, when he plays these songs live, they become bigger, better than on record.

The four men who make up the live incarnation of Bon Iver begin The Wolves’ mantra of “I’m out in the woods” as lone falsetto voices, a capella, building layers and arriving at a place familiar to fans of Fleet Foxes where their plaintive tones create a hymnal effect.

While Skinny Love is a harmonious piece still rooted in guitar it, like the rest of the set, has noticeably grown on the road. But it’s the two enthusiastically thumped drumkits and electric guitar that banish any preconceptions of a pindrop-quiet night amid tearstained cheeks.

Lump Sum was given its head as the compulsive dance track it should be (remixes please, anyone?) with an extended and absolutely addictive outro. By contrast, Re:stacks most closely resembled its stripped-to-the-bone recording, just Vernon’s voice and acoustic guitar and a rapt audience communing over affairs of the heart.

Tracks from the forthcoming Blood Bank EP were introduced, including Beach Baby – all the band now have children. This new material, born of a very different mood and time, is in marked contrast with the huntsman-in-the-wilds album tracks.

The show’s penultimate number was a new one, this time startlingly piano led and jarringly clangy. It served to shine light on another route of development for Vernon’s music and suggest that he’s not going to vanish back to the wilds after one record.

And then the second half of The Wolves, the inevitable epic ending. “What might have been lost,” sang 2,200 people as Vernon grinned ear-to-ear, quiet to start with then rising in volume until the old theatre was filled by an insistent, communal, tangible bond of voices warding off loneliness, winged serpents or come whatever else may. And it was loud. Fie, dragons and presumptions of quietude.