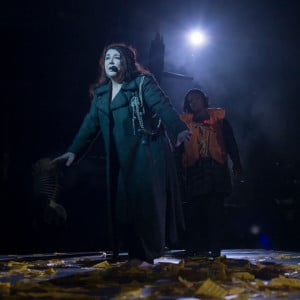 Let us get the inevitable hyperbole out of the way first: Kate Bush’s Before The Dawn is something we all thought we would never see, something largely unlike anything else we have seen, and something we will probably never see again. It is not wrong to emphasise these truths – there is a reason why fans hold up signs for tickets outside the venue in desperation. When an artist of Kate Bush’s peerless individuality and importance returns to the stage after a period of absence longer than this writer has spent alive, it will always be an event.

As soon as she emerges on stage, barefoot, leading a chorus of backing singers that includes her 16-year-old son Bertie McIntosh (much more on this later), Kate Bush receives the hugest, warmest and most genuine of standing ovations. Before The Dawn begins with a relatively conventional mini-set, the song choices judicious but also challenging.

It combines some of her mega-hits in the form of Hounds Of Love and Running Up That Hill (a less compelling artist would have saved these for several rounds of encores) with more recent triumphs – a version of Joanni that is more muscular than its recorded counterpart and a colossal, truly fantastic King Of The Mountain. Opening the show with Lily is perhaps her boldest move here – a resonant, vivid, relatively unappreciated song from her most underrated album (The Red Shoes). Her first notes are dazzling – here is a unique, playful, multi-faceted voice that the audience knows intimately, but which they have (in most instances) never heard outside of a recording.

Like all other aspects of this show, it seems meticulously planned and crafted. The songs chosen less for their innate appeal than for their effortless fit with the power and groove of this excellent band. Perhaps the clearest point of reference would be the band currently touring with Peter Gabriel (indeed, the two ensembles share a guitarist in the form of David Rhodes). The band makes a full, precise and authoritative sound, perhaps best realised on the densely percussive and immersive King Of The Mountain. They also brilliantly recreate some of the synthesiser textures and sounds with which much of this material is so associated. The opening chord for Running Up That Hill, with its portentous crescendo, is immediately recognisable.

Bush writes in her charming programme notes of the importance of the lighting designer and the drummer as the two beating hearts of the project – visually and sonically. Omar Hakim (Sting, Miles Davis, Dire Straits and the source of the outrageous drums on Daft Punk’s Giorgio By Moroder) provides dependable momentum and intricacy at the kit, whilst the lighting becomes more adventurous and integrated as the set progresses. Vocally, Bush often sounds secure and evocative, but is sometimes overwhelmed dynamically by the prowess and force of the ensemble. At her best, she delivers some of the lyrics with a palpable sense of abandon (“I am walking in the VEIL of DARKNESS!’ or ‘Take your shoes off, and THROOOOW them in the lake!”).

The highlight of this part of the show is a stirring Top Of The City – a moment where nuance and dynamics are allowed to creep in, and which is given a rousing gospel flavour in its climactic moments. Bush is a gracious presence throughout, comfortable and relaxed, often beaming with apparent joy. It is hard to believe she ever experienced stagefright and it’s rare to see such a huge, often mysterious star seem so strangely familiar.

As King Of The Mountain reaches a tempestuous conclusion, the band’s percussionist walks out to centre stage and whirls a peculiar object over his head. Thunder fills the auditorium and thousands of scraps of paper are projected into the audience. These fall just shy of row DD of the stalls but apparently contain some lines from The Coming Of Arthur, the Tennyson poem that inspired The Ninth Wave, the extraordinary song cycle that concludes The Hounds Of Love. It is a clear signpost that we are now heading in to a very different space.

What follows is a good deal more than a complete performance of The Ninth Wave – it features all manner of visual and theatrical expansions on the piece’s theme (a woman alone, lost at sea), some striking and successful, others whimsical and a little cloying. The film footage of Kate in a lifejacket suspended in a flotation tank proves a simple but striking and effective image, enhanced by her apparently accompanying it with a tear-inducing, ‘as live’ vocal performance for …And Dream Of Sheep. There are also moments that embrace absurdity – Kate emerging brilliantly from beneath the stage as she is cut out during ‘Under Ice’, the image of the just-about-floating living room and, later in the suite, Kate embracing a buoy and (yes, really), a helicopter descending with a searchlight. There are also some real oddities – people wearing fish masks (perhaps a reference to her record label) and a curiously British sense of humour in the opening (filmed) scene where the shipwreck is first reported.

Much of this serves to enhance the piece’s narrative coherence and long form concept. Some of it, however, seems a little forced. The family living room scene is a neat idea (as Kate eventually interjects to sing the affecting Watching You Without Me) but its rather banal scripted content rather detracts from the emotional impact of the rest of the piece. It is also our first introduction to Bertie McIntosh as one of Before The Dawn’s leading players (thus far, he has been part of the chorus section). The whole elaborate stagecraft also sometimes leaves Kate as a player as part of a wider ensemble (for a good part of it, she is off stage completely). It is important to emphasise that Before The Dawn is a collaborative project, but Kate’s music, which so often more than speaks for itself, places her as a central auteur.

The Ninth Wave (and the first half of the show) concludes with Kate being carried away, off the stage, through the first few rows of the audience and out through a side door. It’s a neat touch that somehow at once brings her closer to the audience and enhances their unwavering devotion and reverence for her.

A 20 minute interval offers a welcome pause to digest the sheer spectacle and excitement of the first half (much of it simply unlike any other ‘pop’ concert). After this, the stage is reset, with the band now located to the left, and a giant door positioned on the right. This is the initial scene for a staging of A Sky Of Honey, Bush’s other great conceptual suite, the second disc of Aerial (which may well come to stand as her greatest album). It is a powerful reminder that this is one of her greatest works, full of warmth, exuberance and delight, and luxuriating in compelling contrasts and unpredictable juxtapositions. Not quite a sequel to The Ninth Wave, it offers more of a polar opposite experience – the extravagant beauty of an afternoon, sunset, twilight and subsequent sunrise, and an extended musing on the communicative delights of birdsong.

Musically, this part of the show is quite fantastic, the band superbly capturing the nuances of the piece and highlighting its most celebratory moments. Some of the theatrical elements are well integrated, such as Kate assuming a wing as night descends. Her apparent ascent at its conclusion is a genuinely jaw dropping moment. The contrasts between lush, reflective textures (particularly when Kate is at the piano) and groove-driven euphoria (especially the closing Aerial) are also enhanced by the screen images of birds and beautiful sunsets. Yet sometimes the staging seems faltering and hesitant, and the band are too often directly obscured by vague visual representations. The use of an artist’s model as a possible metaphor for mother and child relationships is partially successful but also quite eccentric.

A point for debate will likely be the role given to Bertie McIntosh as The Painter (a now uncomfortable cameo for Rolf Harris on the recorded version). This role has been greatly expanded to include more spoken lines and an entirely new song, Tawny Moon, for Bertie to sing. It’s difficult to criticise Bush for this – Bertie has clearly been the main source of encouragement and consultation for her return to the stage. In her own words, “It wouldn’t have happened without him”. He is also clearly not untalented. It is just that his singing voice, although well suited to the medium of musical theatre with its clarity and projection, as yet lacks the character and depth of feeling that Bush herself can convey so effortlessly. The song seems to drag on far too long too.

Still, as Bush delivers a spare and haunting performance of Among Angels (the concluding track from 50 Words For Snow) alone at the piano, it is easy to forgive these indulgences. It is clear that an enormous amount of planning, preparation and hard work has gone into Before The Dawn. Quite how the whole mad scheme stayed so tightly under wraps in this age of social media is staggering, but then this is a deeply private woman who has always kept her family life closely guarded. Before The Dawn may lack sponteneity, but it still trades on surprise.

What the lovely, simple but transcendent solo performance of Among Angels suggests might be significant. Should she be emboldened by the success of this long series of shows, an intimate concert with just voice and piano might be just as overwhelming, if not more so. Yet the image that lingers longest in the mind after the euphoric outpouring of love during the final blast through Cloudbusting is Kate in her lifejacket, trapped in perilous limbo. This might be our only chance to see her before she disappears once more.