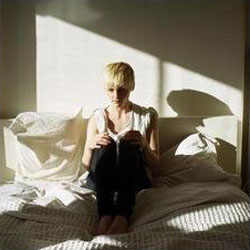 Despite exposure stemming from a decent-selling second album and two Mercury nominations, it’s refreshing that Laura Marling is just about under the radar enough to be able to play well-placed intimate venues that are perfect for the intensity of her sets.

Conway Hall, nestled at the back of Red Lion Square, is the perfect intimate venue. Renowned as a cultural centre and sometime folk venue, the humanist HQ contains an incredibly small art deco hall with excellent acoustics and a capacity so small that wherever you are in the room, you can feel as if you are almost on stage.

There is no build-up; Marling and her band appear suddenly on stage, thundering straight into an energetic Devil’s Spoke. The six-piece take no hostages as they immediately power through favourites from recent album, I Speak Because I Can, including Rambling Man and Alpha Shallows.

She finally pauses for breath whilst the band disappear off stage leaving Marling to entertain the silent crowd on her own with an acoustic set. “Glad that you all made it, you’re a very quiet crowd tonight,” she comments. It is a fair cop; the crowd seem to be completely mesmerized by this 20-year-old’s performance. The atmosphere, especially in the more dramatic renditions such as Hope In The Air and What He Wrote, is so tense, there is no movement at all. Everyone is completely transfixed.

There is very little talk between songs; Marling comments several times that she can’t actually think of anything to say. It is very endearing. With compelling lyrics accompanied by such a powerful voice, there is no need to fill the gaps and break the atmosphere that she so effortlessly creates.

She throws in a Jackson C Frank cover as a treat before the band return for the final few songs of the evening, which has passed far too quickly. Ever humble, Marling warns the crowd once again that this penultimate song is the third of the new songs to be showcased and is a medley of new material, justifying this warning by explaining again that if she were in the crowd, she would want to be warned when new material is on its way. “At the stage we’re at, I don’t want to presume that we’ll get an encore, so if you want an encore, this is the final song, if not, it’s the penultimate song,” she quips. As quickly as she appeared, Marling disappears modestly, avoiding the cheers of an extremely appreciative audience.