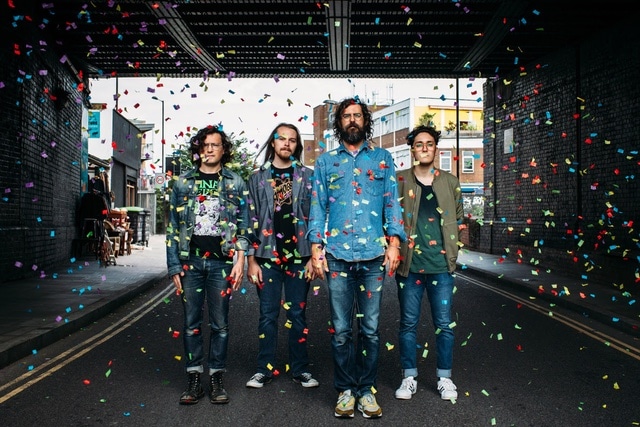 White Denim’s singer and guitarist James Petralli evidently holds himself to very exacting standards. Although his remarkable, fiery and intense band barely stop for breath during the course of this near continuous two-hour set, whenever they do, the space is usually occupied by a furtive apology from Petralli.

Initially he claims to be unusually ‘nervy’, while later he confesses to having been distracted by a minor technical problem, the impact of which remains largely undetectable to the Roundhouse audience. White Denim are ostensibly a rock ‘n roll band, but they carry themselves with the seriousness and intuitive fluency of jazz musicians. Indeed, current powerhouse drummer Greg Clifford studied jazz at the Butler School of Music at the University of Texas. The line-up of the band may have changed a little over the years they’ve been operating (although always operating around the axis of Petralli and bassist Steven Terebecki) but the raison d’être has remained reassuringly consistent: to bring the righteous ramalam.

Currently in the midst of a notably prolific period, the band could either be promoting 2018’s excellent Performance (still only six months old) or launching their forthcoming Side Effects due for release next month. Tonight’s set features Performance prominently and touches on the new album but also draws deep too, pulling an extraordinary 31 songs from across their catalogue. Highlights include an hypnotic and absorbing Anvil Everything (from 2011’s excellent D), the limber melodic stomp of Pretty Green and the smouldering, soulful A Place To Start (both from 2013’s Corsicana Lemonade, and the latter providing some effective contrast in musical colour and dynamics). Somehow, they also manage to get through most of the Stiff album as well, the intricacies and diversions of which come across more strongly over the course of this show than perhaps they do on that particular recording.

Perhaps the most impressive element of the White Denim show is the band’s malleable ability to negotiate effortless segues and weird juxtapositions. Latin and Samba grooves sometimes emerge unexpectedly from guitar solos, there are ingenious time signature shifts and also some superbly executed composed lines. Several songs are often conjoined in dizzyingly wide-ranging medleys. A song such as Mirrored In Reverse neatly encapsulates the key weapons in this band’s arsenal: a thorough understanding of classic rock tropes and a playful willingness to reshape them, super tight rhythmic stabs and abrupt, unpredictable changes in feel.

Whilst there’s undeniably a strongly cerebral element to all of this, with much of the music being carefully planned and arranged, there’s also a tremendous urgency and spontaneity to the band’s performance, with all four members taking visible delight in their musical interaction. Drummer Greg Clifford is restlessly kinetic, all flailing limbs and impressive mobility around the kit, but also expressive and musical. Steven Terebecki consistently delivers frenetic and dexterous baselines with a lithe fluidity. Keyboardist Michael Hunter, rarely visible behind his protective mane of hair, deploys a range of sounds both classic and modern, often duelling with Petralli’s guitar (this is particularly impressive on new song NY Money). Even when the music is at its most disposable and derivative, as on Ha Ha Ha Ha (Yeah), there’s a thrilling degree of proficiency and detail on display, the band drawing as much from Miles Davis’ It’s About That Time as from old motown sides and garage rock.

At times, the relentless energy and over supply of musical information threatens to become wearing, but Petralli also has a sensitivity and warmth that is sometimes permitted to cut through. His voice is both durable and versatile, and itself an important part of the group’s overall sound. With range and depth as well as dazzling musicianship, White Denim are one of the most exciting live acts currently at work.