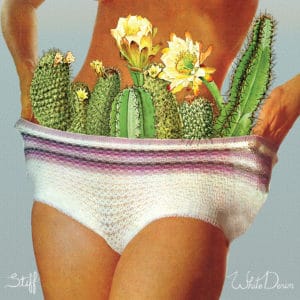 Imagine a wide-eyed friend bursting in to share their passion for a band they’d heard that sounded like prime Southern boogie (Canned Heat), ripping Rolling Stones blues, riffing Led Zeppelin, the funk of Parliament, and some stone-cold soul. You’d be forgiven for picturing an unholy musical Frankenstein’s monster or a friend you’d rather lose, but White Denim have succeeded in grafting musical alchemy to divert your attention.

This Austin, Texas band return in rude health after otherwise crippling circumstances with the sniggeringly-titled Stiff, housed in a sleeve depicting knitted pants stuffed with cacti. Thankfully the listening experience is not a prickly predicament.

After Singer James Petralli’s solo excursion as Bop English on his debut Constant Bop last year, he returned to find a depleted White Denim, due to the departure of original drummer Joshua Block and guitarist Austin Jenkins. Their loss appears to be White Denim’s gain, as after the relative calm (by their standards) of 2013’s Corsicana Lemonade, Stiff returns to their raucous celebratory (whisper it) progressive tendencies, but swapping the self-indulgence for a wide-eyed glee for celebrating music’s touchstones.

In the case of most bands, album number six (seven if you count mini-LP Workout Holiday) should see them exploring African rhythms while batting off the bass player’s song about Saving The Tibetan Mongoose. But Stiff finds them celebrating their myriad influences with gut-busting joyous aplomb. It’s like the retro stylings of The Black Keys, the homage-fuelled The White Stripes, the bar-room blues of The Black Crowes wedged together, but without the wretched earnestness.

From the cooed opening promise of, “Oh, we’re gonna have music” to the closing intention of, “finding a way to run to your heart”, Stiff is never in a state of detumescence. Had To Know (Personal) kicks over the chairs, opens the windows and extends a hand to leave your worries at the door to indulge in some ‘heads-down, no-nonsense boogie’. Ha Ha Ha (Yeah) scampers over Led Zeppelin riffs, with support from Edwin Starr but somehow comes out a sprightly winner, neither weighed down by the source of sounds but buoyed up on another plain. There’s A Brain In My Head gleefully pilfers the staccato chords of The Beatles‘ Taxman. Take It Easy (Ever After Lasting Love) has pure Smokey Robinson soul dripping from every pore with no hint of irony but a breezy honesty.

Stiff also revives that much-maligned titling trick of using brackets on song titles to create additional meaning. So Holda You takes on a more sinister turn when followed by (I’m Psycho) but comes on like southern boogie on steroids. Big Big Fun, when preceded by (I’m The One) positively bulges with boastfulness, but shows up as a vulnerable sashay on the soul side.

There’s a whiff of Bob Dylan on the frenetic wordplay of Real Deal Momma, a visceral rock to Mirrored In reverse and a laid-back shimmy to Thank You that ends the journey that Stiff takes the listener on. All too often the temptation to request the real White Denim to please stand up raises its head, but their fearless deference, peerless musicianship, and ability to pilfer from rock history’s rich tapestry to weave something familiar but still clad in White Denim excuses them such trivialities.