by Jamil Ahmad
published: 11 May 2010 in Live Music Reviews
Tweet 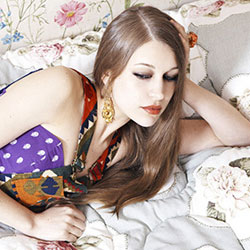 Roy Harper, the veteran singer-songwriter who counts Pink Floyd and LedZeppelin amongst his peers, is wrapping up his hastily soundchecked,stop-start support slot tonight. Roy tells us he came out of retirement to be here.

“I’m looking forward to this more,” he deadpans as he offers up hisadmiration for Joanna Newsom’s arrival. “One of the most beautiful womenI’ve ever seen, performing some of the best music you’re likely to hearon this planet.”

Few would disagree with the statement. With the sunken stage of festival hall glowing deep Tory blue (thelighting ominously changed as the government did) Joanna Newsom emergedin a flowing, latte coloured dress to howls and wolf whistles aplenty.

Much has been made of the vocal chord nodes she had last year – she was forbidden to speak for two months – but her recovered voice is certainly noticeable this evening. Whereonce it was squawky and habitually volatile, it’s now purer, moreconsistent; near faultless, in fact.

The expansive new triple LP Have One On Me gets due prominence thisevening. Much like the initial experience of listening on record, theperformance is a mixture of epic proportion, flourishing to life withthe delicate ’81.

Have One On Me introduces her backing band, criss-crossing the acousticspectrum of the Royal Festival Hall sublimely, with violins, horns, banjos andpercussion, weaving interspersing sounds which compliment Newsom’s lead.Good Intentions Paving Company rides along with a wonderful tippy-tappyflow. The delivery of mellon collie ballad Occident is simply stunning,whilst the encore Baby Birch fills the hall alluringly.

There are moments however, when half way through a song which is 12minutes long you wonder if if shaving a few minutes off would inhibitthe natural lull which accompanies some of the more extended numbers onthe new album.

During a pause for Newsom to tune her harp for Kingfisher,questions where thrown out to the floor which backfired on Newsom andher band and seemed to distract from what had otherwise been a fairlyfocused atmosphere peppered with the odd joke. “Who do you think should be Chancellor of the Exchequer?!” … “Haveyou seen Iron Man 2?!” … “Will you marry me?” came the moronicshouts.

Mildly annoying as this may have been, the current Joanna Newsom liveexperience is still no less majestic and magnetic – whatever she choosesto play – since there are more than enough rich pickings to choose from.And with such a vast amount of new material to draw on it’s notsurprising Ys was ignored and not missed.