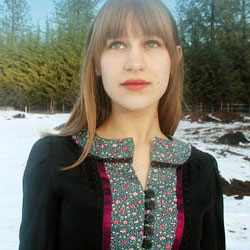 The past couple of times, her sets were predictable and tracks seemed like flat replicas of her recordings. When I was nudged awake at the end of her set at 2007’s Green Man Festival, I decided seeing her live was tainting my enjoyment of the records.

But, when the chance came to see her at Somerset House, I thought I might as well. After all, it’s nice to turn up to a gig with a pack of adjectives already in the bag, even if some of them are made up – elfin, ethereal, mediaeval, predictable, and, er, pixieish. All I need do is remember the set list, and job’d be done.

So when Newsom swans on stage in some couture teal and pink number with her hair swept back in a neat if slightly askew ponytail, rather than the smock and plaits I was expecting, the bottom falls out of my evening. I’m going to pay attention.

As the courtyard clock chimes 9 o’clock, Newsom sits behind her harp and launches into a sedate rendition of Bridges And Balloons. Perhaps tired from a Latitude set earlier that day, her plucking is languid and her voice is less shrill than normal; it could almost be described as husky. But it’s still Newsom-y enough that, shortly into the song, the circling seagulls join in with their plaintive childish cawing.

During a heart rending Emily, I realise what has put me off Newsom before, and why this evening’s gig is shaping up well. Previously her relentless ability to weave intricate melodies on the harp while reciting Milton-length poems word perfect has seemed the work of an automaton. But when her voice catches and she swallows a line, she becomes entirely human. I finally believe that the woman on stage might mean the words of this epic frontier lovesong.

Following a rousing Sadie and the charming gypsy folk of Colleen, Newsom takes to a grand piano. The first of the new songs juxtaposes almost Elton John-style keyboards with Newsom’s familiar poetry. The second is bluesy and its lyrical content a step away from her traditional fare. Lines like “In California you crossed the border of my heart” surprisingly bring Laura Nyro to mind – which can only be a good thing.

As darkness descends the heat leaves the courtyard and Newsom visibly shivers as she crosses back to her harp. Members of the audience offer her their cardigans – well, it is that sort of crowd. Peach Plum Pear and Cosmia receive the warmest applause of the evening, but the beatific yet well-earned audience adulation does nothing to take the chill out of the air. Before her hands seize up Newsom delivers a wondrous Clam Crab Cockle Cowrie.

As the last of the seagulls come to roost and the clock strikes half 10, she shuffles off stage, doubtless in search of a blanket and hot toddy. Her frailty came as a surprise, but this gig was a more moving experience for it.