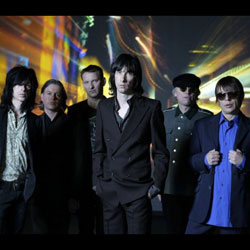 We seem to have a trend developing of late, thanks largely to ATP, for tours that are dedicated to exhibiting albums in their entirety. For some artists, it appears to be a credible way of nourishing the ego and playing material, ‘the way it was intended’. But for Primal Scream’s Screamadelica gigs, it’s given their crowds a chance to capture the landmark album’s trippy highs and lows that mirrored the culture and feelings of a generation, in one journey.

Rarely does Leicester’s Academy draw such diversity, but that’s testament to Primal Scream’s appeal down the years. This tour finds them in stark contrast to the druggy days of 1991 when Screamadelica was released, and Bobby Gillespie himself abashedly suggests they are now “a bunch of old men” – though his sharp dress belies the battering he once gave his body.

The band plays tracks 1 to 10 straight through, choosing to break with Screamadelica at Come Together, right before the record plunges itself into cold turkey. It’s a wise choice as it creates the right party atmosphere for three raucous, rock ‘n’ roll hits – Riot City Blues’ Country Girl and from Give Out But Don’t Give Up, Rocks and Jailbird.

The gig is injected with celebration from the start – Movin’ On Up, with Andrew Innes’ trademark riffs, and Don’t Fight It, Feel It, where original co-singer Denise Johnson injects powerful gospel vocals into the ’90s rave flashback. It sends mops of male hair flailing in the strobes.

It’s the album’s wilder parts that shine, from the trippy highs to polar opposite lows with Damaged, and I’m Coming Down’s soft electronic waves, set against Gillespie’s slurred “I’m coming down, I can’t face the dawn”. Loaded sends the crowd into half melancholic, half ecstatic reminiscence as soon as the first saxophone notes hit. Pushing the dizzying psychedelica and woozy moods into overdrive, Come Together is backdropped with a spiralling multi-coloured vortex, holding an eye at its centre. Gillespie and Johnson sing it like a congregational prayer to siphon an acid trip without the acid.

What is immediately striking is that this Screamadelica tour arrives at almost a polar opposite time to its 1991 release date. Back then, the post-’80s Thatcherite days had lifted a cloud from the nation’s outlook, but on Thursday in Leicester – political climates, fuel prices and all else considered – things felt entirely different. The bumpy ride of late would explain why the gig feels like a chance, for many, to re-enter that mellow bubble they found themselves disappearing into the first time around.

Importantly though, Primal Scream recreate that bubble with ease, rendering Screamadelica in the live setting the irresistible prospect it always has been. It doesn’t matter whether you approach the gig out of nostalgia or pure musical appreciation, the band’s obvious delight and passion for playing their masterpiece hasn’t changed, nor has its timeless quality, or their timeless ability. And on the night, its exuberant positivity is an absolute pleasure to get lost in.