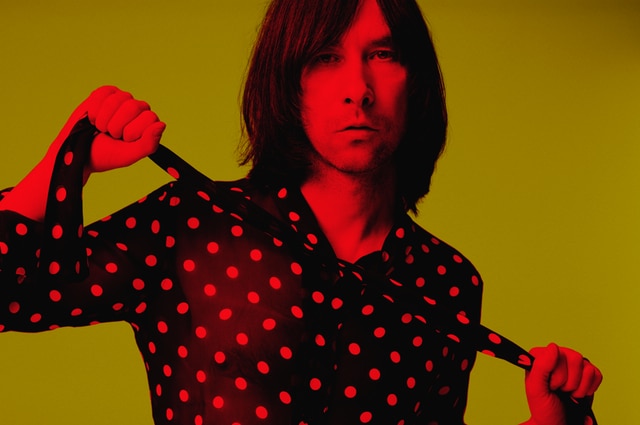 Leave it to Primal Scream to turn the rarified interior of the London Palladium into a den of rock n’ roll debauchery. From the opening bars of Movin’ On Up, this is clearly not the Royal Variety Performance. On tour to support their 11th album, Chaosmosis, Bobby Gillespie doesn’t seem to have aged a second in the 25-plus years that his band have been perfecting their louche insouciance. In a gold sparkling tuxedo jacket over a chiffon shirt and skinny black trousers, he could – and might – shop in the girls’ department at Selfridges.

A cool girl with bed hair joins him to sing Sky Ferreira’s part on new song Where The Light Gets In, backed up by a seven-strong female choir wearing de rigour latex trousers. Bobby first speaks to the audience during It’s Alright, It’s OK, inviting the crowd to sing along with him on the ‘ooh la las’. “Come on!” he chides. “I can’t fucking hear you! So much for rock ‘n’ roll”. The rock ‘n’ roll continues anyway with songs such as Jailbird and Accelerator.

It’s on new song When The Blackout Meets The Fallout that the synths creep in, building up into something darker and harder on Kill All Hippies and Shoot Speed Kill Light. Six screens broadcasting choreographed light displays provide the highly effective backdrop. Strobing monochrome patterns turn the ornate theatre into a warehouse in 1988. Shifting psychedelic colours grow the space into a rock stadium and soft block pastels shrink it back for an intimate singalong.

“OK we’re going to slow it right down,” says Bobby, ahead of Cry Myself Blind. New songs Golden Rope and Tripping On Your Love sit comfortably amongst classics such as Country Girl and Rocks, the audience never anything short of rapturous. They bring out an eclectic crowd, this band: aging ravers, young trendies, fur-coated disco divas,  champagne-sipping fashionistas and at least one young teenager with his dad.

Some theatrical flourishes add texture not found in a bog-standard gig venue. An usherette in a crisp red waistcoat meanders down the aisle to stand stage-front and hold aloft her wares: a can of Stella in each hand. There’s an added distraction from the drama on-stage with the temptation to peer into the boxes, to check out who’s dancing and who’s unashamedly grateful for the seat. The band leave after Rocks with little ceremony but a quick roadie soundcheck gives the game away: they return imminently and launch into 100% Or Nothing.

“This is about the summer of love – the second summer of love,” announces Bobby, probably his longest speech of the set, ahead of Loaded. He dances centre-stage with maracas, the earlier loss of his gold jacket rendering him a black-clad sylph, a peaceable rave ninja.

Come Together is the final song, a veritable rave opus, the visuals collapsing into a mesmerising, endless eye. “We’ve had a beautiful experience,” concludes Bobby, a frontman comfortably in his stride, still conquering new venues, adding new fans to the fold.