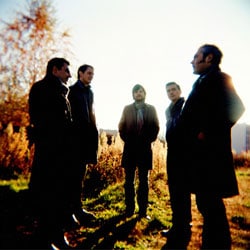 The Serpentine Sessions set up is a strange one. Clearly being used as a means to fill the gap between stadium hitters who take to the stage in the park on the weekends on either side, it could be cynically seen as a corporate, half-executed attempt at creating a tranquil, bohemian atmosphere.

But with the polite, mostly thirtysomething audience soaking up the height of a London heatwave, it’s pretty difficult to find fault in the relaxed nature of it all.

On the third and final night of the series, Stuart Staples, now grey haired but still displaying his smart, rigorous dress sense, follows his band out quietly to a near empty tent (the band are on earlier than advertised and everyone is quenching their thirst a the nearby watering holes). But soon this is corrected as the audience huddle in and hush for one of the most significant British bands of the last two decades.

With no new record to promote and a London performance not being the rarest of events for the band (there were several gigs in the capital last year to promote grossly overlooked Hungry Saw LP, and the half full tent tonight confirms that), the band know that this is essestinal for the hardcore fanbase and respond to this with a devotee-friendly setlist, compromising of at least one track from each of their seven records.

So we get a gorgeous Can We Start Again?, with the string section sounding fantastic through the PA and capturing the heartbreak of the songs lyrics to near perfection. Sleepy Song, which gets the night’s biggest cheer, is revelatory, glimmering as much as the dusk sky outside and Staples’ vocals at their most serrated and rich, to the delicate patter of the percussion. If She’s Torn, a favourite from the Simple Pleasures record, could be confused with an old American soul number, with the searing horns in the chorus making it nothing less than mesmerising.

With new drummer Earl Harvin on board you’d be forgiven for expecting that the band would need time to let the songs come together and find their feet with the new line-up. But any signs of difficulties are not seen here, and despite the lack of much onstage acknowledgement to his audience, Staples smiles and looks relaxed throughout.

For the encore, Staples dedicates a brilliant Before You Close Your Eyes to an old friend who died 10 years previously who “loved to dance”. It’s a touching moment, and one clearly close to the bands heart given the rarity of the song’s airings in the live arena. Arguably the band’s most well-known single, Tiny Tears, ends proceedings and Staples is clearly taken aback with the crowd’s enthusiasm, ensuring them that they will be back very soon. It’s a perfect ending to a unique evening and one that will surely rank among the band’s best to the faithful following here.