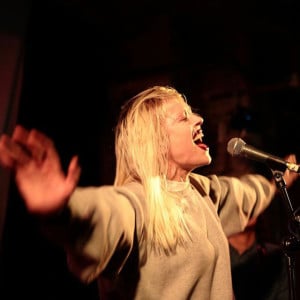 Ballet School played several times during the festival, including this performance at the Green Door Store.
[Photo: Rob Orchard]
Windier than a Legumetarian after a 15-course banquet, Brighton is blowing a gale as The Great Escape 2014 opens for business. But our creed is like that of the American postman: neither wind nor snow, nor rain nor heat (ha!) will stay musicOMH from the completion of our rounds.

Our rounds opening with Ginger And The Ghost, an Australian two-piece in thrall to the eccentric with the singer clad in lingerie and swan wings and the stage layered with papier-mache glaciers. They’re interesting in a Niki And The Dove or Polly Scattergood way, melodic yet bracingly rhythmic. Although, we are a touch too sober for it. Although, given it’s only just turned lunchtime, that is probably for the best.

Doomsquad, on the other hand – well, you probably wouldn’t want to be drunk for them. It’s a phenomenal row in the best way possible, a confrontational meshing of Jagwar Ma psychedelia and a meditative retreat, drum machines and discordant guitars and unhinged chanting. Heck, there’s even a recorder in there and we didn’t want to kill ourselves in response, which has got to be the highest praise possible. 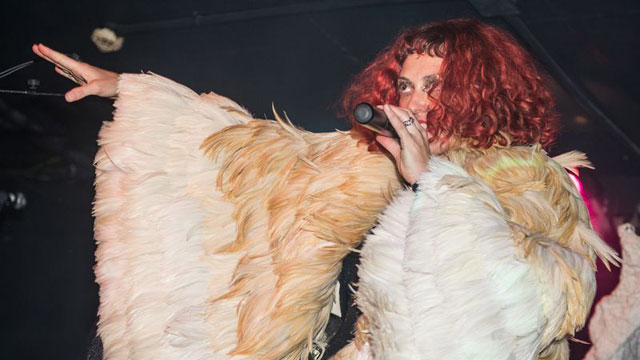 Ginger And The Ghost [Photo: Andy Sturmey]
It takes a lot to lure us to the basement of the Queen’s Hotel – well, free drinks and a USB stick – a characterless space with white walls and corporate carpet and way, way too much daylight for a band like Gartmalen to deal with. Cloaked and cowled and waving banners of arcane symbols, this Dutch duo conjure nightmare from twisted synths and stabs of noise, their vocals wraithish and effected, but despite their best efforts the room defeats them, such that the result is less horror than comedic. 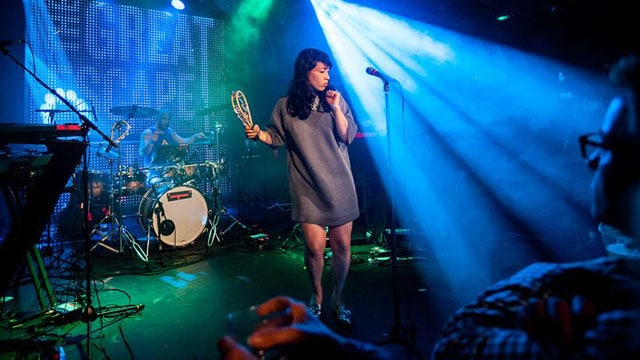 Little Dragon [Photo: Andy Sturmey]
Over in the arches by the seafront the waves may be threatening but as Ballet School take to the stage inside Coalition, the atmosphere is pure disco. Based in Berlin, the trio channel The Cocteau Twins and early Madonna for their distinctly ’80s take on alt-pop. The big surprise tonight is singer Rosie Blair’s voice. On record it fits perfectly with the glacial tone of their twisted electronics, but live it’s a different beast, and even better for it. Think Cyndi Lauper and Elizabeth Fraser combined, with a deep, near-operatic range. Stunning.

They’re followed by the much-hyped Drowners, whose NYC-meets-The Libertines indie rock seems simple and…well, boring. They’re named after a Suede song, but the result is more The Vaccines: lazy, easy guitar tracks that fails to make an impression. It seems an odd choice to be sandwiched between Ballet School and the following, and equally compelling, Little Dragon.

The Swedes cut their music from the same cloth as Ballet School, but approach it in a more minimalist way. Dreamy, floaty electronics that render singer Yukimi Nagano’s words irrelevant.Their new album, Nabuma Rubberband, is out next week, and glimpses of it during tonight’s short set suggest a somewhat darker turn – less twinkly, more smouldering and soulful. 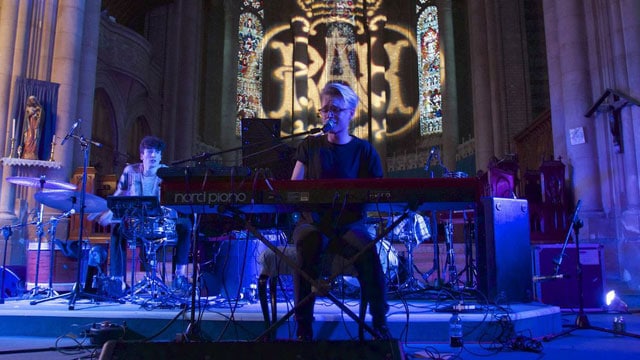 Erased Tapes signing Douglas Dare played at the atmospheric St Mary’s Church. [Photo: Rodney Beckford]
Next door, in the tube like Bermuda Triangle, Glasgow’s Honeyblood are dreamy yet grungey. Pared down (there is only two of them), yet loud, and fuzzed up to the max, the lovely lilt of Bud and the additional teeth-demonstrated on Choker offer a promising introduction. A bit like My Sunday(s) Bloody Sunday(s) Valentine. Hmm. Needs work.

Douglas Dare, while signed to post-classical specialists Erased Tapes, brings vocals to the mix on his debut album Whelm. Unfortunately the epic reverb at St Mary’s Church all but drowns them, even if we get a tantalising glimpse of a fledgling talent. Augustines, all the way down the road at Concorde 2, prove to be well worth the hike. Front man Billy McCarthy tops off an energetic set of rock ‘n’ roll by descending into the audience to sing a surprisingly sweet encore, surrounded by a rapt audience. It’s a showman’s thing to do, and he undoubtedly is one. 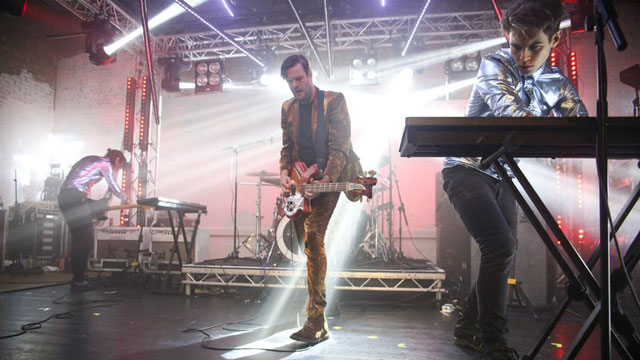 Having headlined last year, Klaxons played a secret gig at The Great Escape 2014. [Photo: Mike Burnell]
The queue outside The Warren may well be a result of Klaxons‘ announcement of a secret late night appearance, but if there was any justice in the world it would  be those who’ve come to worship at the altar of Chlöe Howl. Although, even if she can’t quite command that level of compulsive admiration yet, it really can’t be long.

No Strings and Drop In The Ocean are magnificent, while if anyone finds a better, smarter, poppier pop song than Paper Heart this year we want to hear it. And then lock it in a sealed container, cover it in lead and send it to the very bottom of the deepest darkest ocean, as surely such a thing would be so dangerous to the very fabric of our being that it must be prevented from ever escaping into the wild.

Check out reports for Day 2 and Day 3