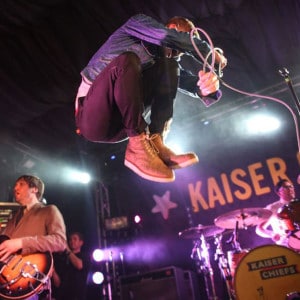 Kaiser Chiefs played a ‘secret’ gig at lunchtime in Concorde 2.

Friday in Brighton. musicOMH curates a stage and finds a new favourite band, Royal Blood make a racket and The Amazing Snakeheads live up to a large part of their name…

The day begins, as is its want. For some, it starts with a ‘secret’ (tweeted 24 hours in advance) gig by the Kaiser Chiefs along at Concorde 2 for lunch. One of the aims today, trying to move away from Thursday‘s trend of female vocalists singing over synths, doesn’t start well. As that’s precisely what Black City Lights are. However, they do have a cinematic quality that sits nicely with our sleep deprivation.

Talking of hallucinating, Japan’s Ichi, with his stilts and his ping-pong bats, singing songs about mosquitos could be one. Although the idea of a rogue children’s TV presenter messing around with steel pan drums and a harmonica sounds horrific, there’s a load of fun to be had watching the cynicism drain from those watching in childish glee at his efforts.

The Spiegeltent is particularly busy as everyone makes the most of the sunshine. Good news for Ezra Vine, whose sunny guitar-pop draws in a large crowd. Most of his songs are like Celeste – radio-friendly, Tom Odell type stuff, but when his band step back and his vocals come to the fore, he can weave something more moving. What You’re Made Of is almost menacing, voice notably deeper and far more commanding.

Menacing is something Esben And The Witch do very well. Playing as part of the Alternative Escape programme, Rachel Davies’ vocals pitched as the pleading voice of sanity as two armies – guitar (Thomas Fisher) and drums (Daniel Copeman) – mass on either side of the border and attempt to batter the other into submission via the sheer size of their arsenal. The opening No Dog in particular sounds utterly, biblically, brilliant. 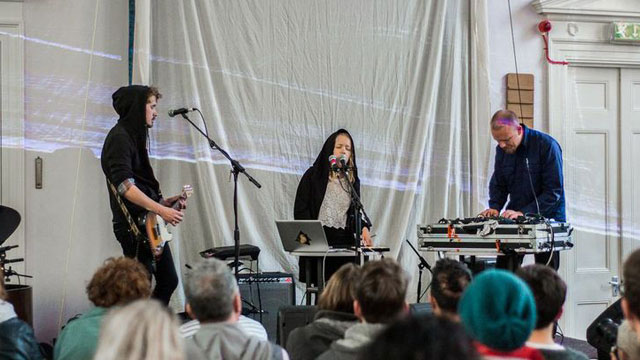 Sea Change at the musicOMH stage at the Unitarian Church. [Photo: Tori Clarkson]
Nico Vega also up the volume nicely, all brash guitars and LA swagger, their garage-rock sleazy and invigorating, even if their performance draws a little heavily on stadium cliche. Drum solos? Guitarists yelling “fucking rock!” over and over? Er, maybe later. But Brighton’s own Royal Blood are much more interesting, generating a staggering amount of noise for just two people and putting to death the notion that a bass guitar is a background instrument as Mike Kerr metes out Zeppelin-style riffs over the low-end growl. Wonderful, bracing stuff.

Call us biased, but the bill at the musicOMH-curated stage at The Unitarian Church is quite special. Norway’s Sea Change are an early delight, defying the sun streaming in through the stained glass windows to deliver bleak, slow burning lo-fi electronics. Things are then delayed by Lyla Foy‘s automotive issues (her van nearly exploding on the drive down). When she does arrive she immediately is at ease, making easy chatter with the crowd. The natural comfort comes across in her music too: simple folky pop songs, she is not the usual artist that Sub Pop veer towards, but intriguing nonetheless. 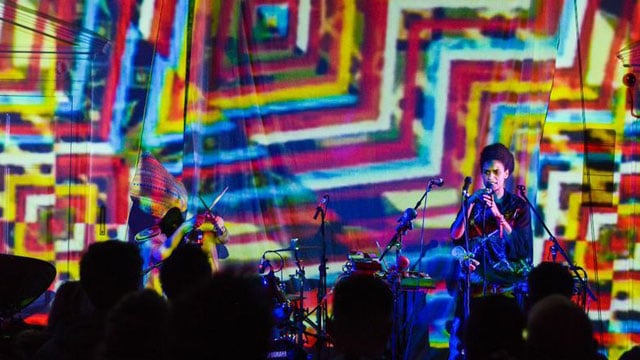 Oy at the musicOMH stage at the Unitarian Church. [Photo: Tori Clarkson]
Then Oy. Comprising singer Joy Frempong, a sort of Swiss-Ghanaian female Prince, and drummer/producer Lleluja-Ha – his face entirely obscured by a weird hat/hair combo that’s part archbishop’s headgear, part backwards-facing Bo Ningen member – they are clearly going to be taking things in a different direction. The songs are inspired by trips to Africa, and Frempong weaves characters from her travels into proceedings – literally. Using a vocoder, she intertwines different voices, street sounds and tribal beats into their electro-melodic chaos. One little ask and the entire room is on their feet dancing, Frempong beaming at the sight of a church, blitzed by rainbow-coloured lights, joining them on their vivid journey.

Slightly less rainbow-coloured and slightly more tear-stained, Broken Twin‘s minimal compositions are brought to life by a three-piece band. Despite the extra help, she’s very much at the centre of everything going on. It’s an intense experience, as her icy vocal breaks through a backdrop of thudding bass and eerie violin. But it’s easy to find solace within the wintery picture she paints and the venue feels like it was made for her. 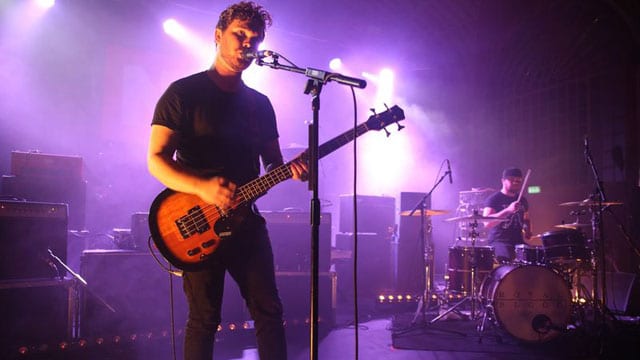 Royal Blood at the Corn Exchange. [Photo: Mike Burnell]
If you were considering a mechanism for ensuring entry into one of the more high profile / low capacity events across the Great Escape weekend, having a stare like The Amazing Snakeheads‘ frontman Dale Barclay would probably be a decent one. For pure visceral thrills, his band are unbeatable. Topless from the off, Barclay looks right through the crowd, lip curled in a glorious Elvis sneer and asks “Are we amongst friends, aye?”

Oh aye. Tiny and sweaty, The Hope is perfectly suited for this sort of dark, frenzied assault. There’s bits of rockabilly in there, plenty of the barely concealed violence of The Birthday Party and enough malevolent energy to destroy buildings.