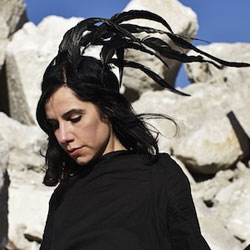 After 2000’s outgoing, Mercury Prize-winning Stories From The City, Stories From The Sea, Polly Jean Harvey retreated into her shell. First she released the minimalist, deliberately elusive Uh Huh Her and then 2007’s even more stripped-down White Chalk. Both are good records – an artist as thoughtful and committed as Harvey is unlikely ever to release a bad one – but they were also easier to admire than to enjoy. But Harvey’s latest release, Let England Shake, bears an accessibility and tunefulness that belies its weighty, predominately war-focused subject matter.

The shedding of her music’s hostile underbelly has undoubtedly done the trick for Harvey commercially (not that she’s likely to worry about such things). Let England Shake entered the UK album charts at Number 8, her highest placing for 18 years. It’s also helped her sell out two consecutive nights at London’s rather big art deco Troxy.

Taking the stage at the first of the shows, Harvey is wearing a bizarre wig that resembles a hedge harbouring a startled crow’s nest. She stands stage right, cradling an auto-harp like a newborn baby. She’s supported by her regular collaborators John Parish (guitar) and ex-Bad Seed Mick Harvey (a bit of everything). Over the course of the evening she plays Let England Shake in its entirety, while 1998’s undervalued Is This Desire? is the most heavily represented of her other works – fitting, as its elegiac tones make it probably the closest antecedent to Let England Shake in the Harvey discography.

The songs range from very good to excellent and, as you’d expect from such an esteemed band, the performances are exemplary. Why, then, does this gig fail to properly lift off and become the transcendental experience it ought to be? It’s largely attributable to Harvey’s failure to address the audience between songs: her first spoken utterance doesn’t arrive until the encore, when she introduces her bandmates. No-one’s expecting playful banter and between-song jokes from Harvey, and it doesn’t come across as rude exactly. But it just means that watching this gig is akin to watching a theatrical performance: professional but hard truly to engage with on a visceral level. Matters aren’t helped by the venue itself, which is uncomfortably hot and – thanks to the presence of food stalls in the foyer – reeks rather unpleasantly of burnt cheese.

This, of course, isn’t Harvey’s fault (unless you’re into really strange conspiracy theories involving the artist and the Cheese Marketing Board) but it would be nice to see Harvey lose herself a bit more in the performance. She’s famed for communicating through theatrical personae in her lyrics. Unfortunately that same sense of artifice afflicted this performance, preventing it from reaching its sizeable potential.