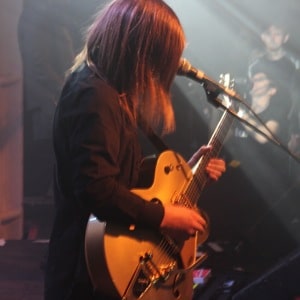 We’ve been here before. Haven’t we?

Wasn’t there even some sort of revolution last time? A rock revolution? New rock? Following the old rock? Yeah, that one was ace. Saved us from some horrific musical dictatorship. Prog, probably. Then, of course, there was the garage rock revolution. Yeah, that was great too. Didn’t some kind of statue get toppled during that one?

All these musical revolutions, all the distractions and diversions in the world, new-wave, old-wave, no-wave, drum’n’bass, electroclash, dubstep, witch house, chillwave, whatever, and we always seem to end up back at bands like Band Of Skulls. Maybe we like it.

Besides, at the moment unreconstructed bluesy-rock can get you a long way. Take The Black Keys. Now selling millions of records, headlining SXSW and playing multiple nights at Alexandra Palace. Multiple nights with Band Of Skulls as a support act.

Which leaves us in a philosophical quandary. Are we suggesting Band Of Skulls are potentially good enough to get big enough to offer themselves a support act while playing a massive show in London? No. There was a different point originally intended.

That point was: Band Of Skulls are a fine example of an unreconstructed bluesy-rock band. Tonight’s show is delivered with poise and power, and achieves all the things that you could want from it. The drums pound. The riffs echo and resonate with Led Zeppelin-esque intensity. The vocals yearn and howl in a way that make you think someone in this life done them wrong.

The opening Sweet Sour is as louche and deliciously sloppy-yet-precise as a Jagger hand-clap. You’re Not Pretty, But You Got It Going On is the pick of many wonderfully fuzzy, screaming guitar lines Russell Marsden wrestles out, and the frequent harmonic interplay between Marsden’s Plant-like wail and bassist Emma Richardson’s more restrained vocals adds another dimension to proceedings.

Plus it’s all fun. Grimy, dirty, leather clad, old-fashioned fun. It’s the kind of fun your mother warned you about. The kind of fun the church frowns upon. The kind of fun that makes you want to flog your possessions, buy a Transit van and spend the rest of time crawling from dive bar to squalid shit-hole with a Marshall stack, Ginsters pasty and three chords for company.

They played for 90 minutes and it didn’t sag. Tracks like Bruises, reasonable on record, are magnificent live. Losing the studio sheen and gaining an in-the-flesh performance edge really suits the sound they’re trying to construct.

No, Band Of Skulls are not musical revolutionaries. But, on tonight’s evidence, it really shouldn’t matter.