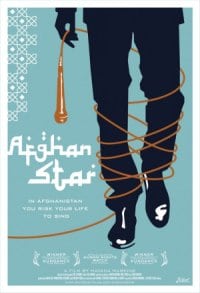 directed by
Havana Marking
Im going to shoot a documentary about Pop Idol, but in Afghanistan!

It could have been one of those slightly dubious X-meets-Y elevator pitches that ends up producing a half-baked and superficial docu-drama. Afghan Star is neither of those things. In the hands of Havana Marking, this is an utterly gripping and engagingly human film. It is the story of a shell-shocked culture finding its voice.

Before we get into that, however, we need a little historical background to understand what a radical idea the Pop Idol format is in Afghanistan. Up until 2001, music, dancing and television were all banned under the Talibans rule. Before that, the US-backed Mujahideen had also considered music to be religiously disrespectful. It had not, it is safe to say, been an environment Leona Lewis would have thrived in.

But Afghan Star is not so myopic as to suggest that Afghanistan is without musical tradition. The film opens with a long, static shot of a young boy, blind in both eyes, singing his heart out straight to camera. He cant be more than six or seven, but when he finishes he tells us that without music, human beings would be unhappy. A reality his parents generation lived through.

One of the most remarkable pieces of footage in this exhaustively researched film is video of a student party in the early 80s. Marking unearthed the film in Kabuls rarely-accessed television archives. It features an Afghan electro-pop band who look and sound as if theyve just walked off the set of Top of the Pops. It is evidence that pop music isnt something new or imposed. For many Afghans, its the reclaiming of an identity that has been forced to lie dormant for decades.

The third series of Afghan Star provides the narrative backbone of the film. We see the familiar Pop Idol structure from multiple viewpoints. The producers and the host Daoud Siddiqi must overcome various technical problems to bring the show to life for their young TV station, but they do it with passion because they are zealots. They believe they are bringing freedom, democracy and a unified cultural identity to Afghanistan. They are rewarded with a huge and dedicated audience.

Hameed is a classically trained singer and musician, who is worshipped as a proud figurehead by his Hazara ethnic group. There are far fewer women than men involved in the heats, but two get through to the final ten. They have vastly contrasting styles, although both become targets from more fundamentalist Islamic viewers. For Lema, the problem is that shes from Kandahar, a culturally strict area where women are expected to wear a full veil and singing is frowned upon. Despite her respectful, understated performances shes still threatened whenever she returns home.

Setara, in contrast, is much more flamboyant. She relishes the attention and her performances court real, life-threatening controversy. In her wildest fantasies, Lady Gaga could never shock an audience as much as Setara does.

Afghan Star tells many stories simultaneously without ever seeming crowded. Marking has not settled for simply delivering the drama that the series and the opportunity to get behind-the-scenes gave her. She takes the time to draw in other voices in Afghan culture, from religious leaders to kids on the street.

It is these voices which place the Afghan Star phenomenon in context. In the end, it is about so much more than a TV talent contest. Its about young people being introduced to voting for the first time. Its about the way the contestants split public support in a country dogged by ethnic tension. Its about the tension between womens rights and the residual values of the Taliban. Most of all, it is evidence that sometimes, and in some places, music really is a revolutionary tool.