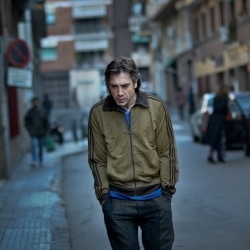 Nominated as Best Foreign Language Film in both the Oscars and BAFTAs, Mexican director Alejandro Gonzlez Irritus fourth feature is unlikely to gain him any new admirers, and may well turn some of the old ones off.

One of the leaders of the Mexican New Wave, his much-acclaimed Death Trilogy Amores Perros, 21 Grams and Babel has been hailed as an unflinchingly truthful depiction of the human condition. It was also criticized by some for being unrelentingly grim in tone, with overly contrived narratives. Although it has moments of transcending beauty, Biutiful piles on the agony even further as if Irritu is determined to make the audience suffer as much as the characters on screen, with its morbid themes given sledgehammer subtlety.

But if Irritus dark preoccupations remain the same, Biutiful is interesting as the first wholly Spanish film he has made since his 2000 debut and as his first since the acrimonious split with long-term screenwriter Guillermo Arriaga. Here, with his co-writers Armando Bo and Nicols Giacobone, he has moved away from the increasingly transnational, overlapping storylines to a much tighter focus on a single protagonist in one city.

Uxbal (Javier Bardem) is a small-time hustler in Barcelona, struggling to survive in a hostile environment. As well as acting as a go-between for illegal immigrants (both North African street hawkers and Chinese working in sweatshops and on building sites), he claims to be a medium who can pass on messages from the spirits of recently deceased children to their grieving parents for money of course.

However self-deluded, Uxbal retains his own sense of a moral code, believing he is helping unfortunate people. Moreover, he is shown to be a loving father to his young daughter and son, desperately trying to look after them by himself as his estranged, bipolar wife is totally irresponsible. If all this wasnt enough, he then finds out he is likely to die of cancer in only a few months, so must safeguard his childrens future while he still can.

Irritus Barcelona is far from the tourist image (like the chic city portrayed in Woody Allens Vicky Cristina Barcelona), as we follow Uxbal into its sleazy underbelly of pimps and prostitutes, drug dealers and addicts, shady gangmasters and exploited migrants. With the help of Rodrigo Prietos in your face cinematography and Stephen Mirriones razor-sharp editing, there is a real feeling of claustrophobic intensity in this urban jungle. But the unremittingly dismal story turns the screw too much, so that the tragic loss of innocent lives at the heart of the film seems predetermined.

Similarly, although there are some very touching episodes of unexpected humanity, the redemptive theme of the ability for unconditional love to rise above the ugliness of oppressive circumstances is ultimately unconvincing. Uxbals deeply flawed morality is extended to a half-baked spiritual awareness that smacks of sentimentality.

However, Bardem (who shared the Best Actor prize at Cannes last year, and is also nominated in the imminent Oscars and BAFTAs) gives an extraordinarily committed and persuasive performance as the doomed anti-hero. His unglamorous and unshowy portrait of a man sick in body and soul, but fighting on with a full heart, has great emotional power. Its just a pity that his characters fate, like those around him, is so obviously predestined for misery.