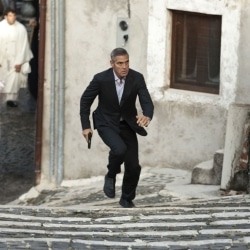 Rowan Joffe has freely adapted his screenplay from the 1990 Martin Booth novel A Very Private Gentleman. It focuses on the mysterious American Jack, who makes high-quality, bespoke guns for professional assassins, hiding out in the guise of a photographer in a village in Abruzzo, east of Rome, after narrowly escaping an attempted assassination of himself in Sweden. Alone and forced to rethink his life, he becomes emotionally involved with a beautiful Italian prostitute, but before they can go away together he has to finish one more job which turns out to be more dangerous than he expects.

This story of a clinical, machine-like arms expert, himself capable of killing ruthlessly (as we see in a shocking opening scene), who becomes humanised by falling in love, which in turn makes him more vulnerable, may seem a bit predictable. But despite a few unconvincing plot turns, overall Corbijn handles the scenario with considerable skill and visual panache.

As a thriller, The American may be too slow moving for some (perhaps betraying Corbijns origins as a stills photographer), with more suspense than action (though theres an exciting scooter chase through cobbled streets). But every frame is artfully composed to build up an intriguing portrait of a changing man, about whose background we never learn. The weakest element is the developing love affair and the strongest are those scenes showing Jacks single-minded professionalism in assembling a gun and his continual vigilance which underlines his isolation.

Cinematographer Martin Ruhe (who also worked on Control) shoots the film with austere beauty, moving from a snowy Scandinavian forest in the early scenes to the fertile rolling hills of mid-Italy, without ever becoming too picture postcard.

Jack sees Clooney in his darkest, most laconic role to date, the furthest away from his persona as a charming romantic-comedy lead. Taking the loneliness he expressed in Up in the Air and the paranoia of Michael Clayton to a more intense level, he does not try to make his character too likeable, while suggesting his potential for transformation, perfecting the art of less being more.

Violante Placido is an implausibly gorgeous prostitute, while Thekla Reutens coolly attractive assassin fails to persuade us that she is a cold-blooded killer, though there is a satisfyingly tense stand-off between her and Jack near the end. Johan Leysen gives Jacks criminal contact a nicely understated menace, and Paolo Bonacelli lights up the screen as the perceptive local priest with human failings in his own past who tries to save Jacks soul.

Quietly compelling rather than overtly thrilling, The American marks an interesting development in the careers of both its director and its star.