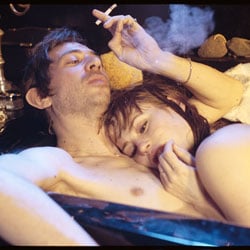 In the late 1950s a film called La Belle Américaine caused quite a scandal in French cinemas, for the sole reason that it starred a car made by the American firm General Motors. At that time in France it mattered whether a car was made by Detroit or De Dion. Le Défi américain – the newly encroaching US socio-economic order – was widely considered a threat to French national identity, prompting Jean-Marie Domenach to write of the société de consommation: “This society is not yet ours, but it – or one that resembles it – could be our children’s. The United States is a laboratory exhibiting life forms into which we have entered whether we like it or not.”

As Joann Sfar’s biopic reminds us, the Americanization of La Belle France was never felt so keenly as in the figure of Serge Gainsbourg. He was a French national icon who namechecked cool American products, invoked Bonnie and Clyde, and named a song after Charlie Brown. He borrowed from jazz, Charleston, swing, and psychedelia to create a syncretic form of the la chanson franaise. Taking a jumbled globalising France for everything it had, he was destined to provoke those acute sensitivities of French nationalism.

Drawing on his graphic novel about Gainsbourg, Sfar makes this nationalism a recurring theme throughout his lush and expansive comic book-like film. The first time we see Gainsbourg deliver a song it is in the occupied Paris of his childhood. He instigates a singalong while sitting on the counter of a worn shop, breaking into a filthy ditty about coca cola (“give me some Coke to give my brain a poke… I killed my gigolo”). He leaves sucking on a coke, and we are left in no doubt as to the transatlantic version of community that Gainsbourg looks to promote. At the same time we are left in no doubt as to Gainsbourg’s relationship to French authority, as he makes himself first in the queue to collect the star of David to wear on his chest as a mark of historically colossal outsidership.

Famously Gainsbourg hated his looks. He once sang about himself “with a face like this / Good God!”, and accordingly the black-painted walls of his house on Rue Verneuil featured no mirrors. But rather than resorting to the vagueness of “self-image” Sfar smartly concretises Gainsbourg’s ugliness in the anti-semitism he suffered as a child. So a grotesque Anti-Semitic stereotype jumps down from a propaganda poster in the first of the film’s CGI figurations, and toddles along beside the young Gainsbourg like a scene from a genuinely terrifying Where The Wild Things Are. Movingly the young boy is determined to identify with its malignant power, and sleeps beside it. If they are going to hate me, he seems to say, then they can really hate me. Later we are treated to a CGI vision of “Gainsbarre”, the singer’s alter-ego whom he would regularly invoke as the perpetrator of his more immoral acts. With improbably extended nose and ears, and the same spindly beckoning hands as the faun from Pan’s Labyrinth (indeed, it’s the same actor, the contortionist Doug Jones), Gainsbarre exhorts the singer to further excesses.

But while the CGI puppet hangs around for too long, and feels slightly derivative, it’s the acting that feels fresh. In a very fine central performance Eric Elmosnino incorporates the beckoning hands of Gainsbarre as a mark of his moral decline, a piece of physical acting which comes off as a lot more potent than the oftentimes clunky dialogue between the two. Under a prosthetic nose he bears a remarkable resemblance to the singer, and nails the transformation from slapstick young artist to degraded aging Libertine with just the kind of graceful continuity that a biopic needs to hold its centre. There’s a welcome cameo from Yolande Moreau (the star of the peerless Seraphine) as a louche old Chansonnier, and Laetitia Casta is suitably fragile and luscious as Brigitte Bardot. Jane Birkin is played by a spry Lucy Gordon, who sadly committed suicide shortly after filming and to whom the film is dedicated.

Sfar clearly adores his subject, and Vie Héroïque does suffer from hagiographic overtones. We get Gainsbourg’s dub-reggae rendering of La Marseillaise as a political triumph rather than a manipulation of the media gestalt. The film even invites us to take a certain amount of visual relish in Gainsbourg’s misogyny, even while driving it to its lonely conclusion. But ultimately the subtle contextualisation within French culture, and the tugging theme of nationalism, eclipse any sentimentalising of the ugly man’s hero. This is Universal’s first ever foreign language film, and fittingly the decline of the man comes packaged in American symbolism. The waning of his sexual powers, his final incarnation as a Pastis and Gitane soaked old lothario, takes place in an Americanised disco. Earlier, sat in a blue Lincoln sedan on a beach, cradling a Colt 45 handgun, he precipitates the leaving of his wife and collaborator Jane Birkin.

In reality Gainsbourg never owned a Lincoln, he bought a 1910 Rolls Royce which he wrote about in his psychedelic opus Histoire de Melody Nelson, fantasizing about knocking an underage girl from her bike and subsequently seducing her. He couldn’t drive and referred to it as his “ashtray”. But Sfar made the right choice of car; the British make wouldn’t supply the same resonance with celebrity downfall. This film learned as much from La Belle Américaine as it did from Walk The Line or La Vie en Rose. Vie Héroïque captures a chaotic and in many ways anti-heroic life, through a historical French lens which explains more than it exculpates. Where Gainsbourg, in his song Ford Mustang, references Marilyn Monroe as the apocalyptic face of pop culture, Sfar has no need for Warholisms. He’s got Gainsbourg.