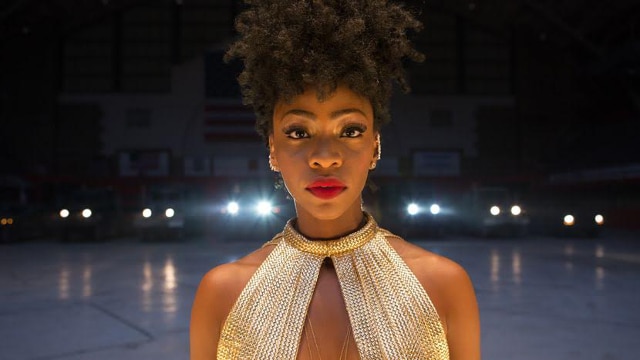 Spike Lee’s exuberant, sassy hip-hop musical is both topical and archetypal. It transfers Aristophanes’ classical Greek comedy Lysistrata – in which the eponymous heroine persuades all women to go on a sex strike to stop their men waging war – to contemporary Chicago. “Chiraq” is a street-slang mash-up of “Chi-cago” and “I-raq”, highlighting the fact that in the last 15 years more people have been killed in Chicago than American servicemen fighting in Iraq (and Afghanistan); a shocking 7000-plus. It’s a war zone on home soil.

Lysistrata’s lover is Chi-Raq, a rapper and leader of the purple-garbed Spartans who are engaged in a deadly conflict with orange-clad rival gang Trojans, led by the one-eyed Cyclops. After an 11-year-old girl is killed in the crossfire, Lysistrata (encouraged by her activist neighbour) decides it’s time for girl power to intervene and convinces her sisters on both sides of the divide to take action. With the slogan “No peace, no pussy” they strike at the men’s weakest point in a battle of the sexes where it’s clear who’s on the right side.

The first film produced by Amazon Studios, Chi-Raq is a broad comedy (co-written with Kevin Willmott) that has a very serious intent; if the farce occasionally gets a bit silly, sometimes the movie is fuelled by a lot of rage too. The target is the macho gang conflict of black-on-black violence in the economically deprived, neglected Southside area of Chicago, which offers few opportunities for young men to get out of the ghetto.

In the powerful opening scene set in a club, Chi-Raq and his crew are rapping on stage, the delighted crowd grooving, when shots ring out. After a stampede for the exit dead bodies are seen lying on the floor. There’s also a big church gospel number with an orchestra, band and chorus and the congregation joining in for the memorial service of a murdered child, followed by a sermon from the priest containing the main message of the film: how the community needs to reject gun violence in favour of loving togetherness, but also how the politicians need to improve the socio-economic environment.

Chi-Raq is not a fully-fledged musical, most of the film’s story being told through dialogue, but there are dynamic musical set-pieces and a vibrant soundtrack featuring hip-hop, R&B, gospel and blues. The rap lyrics are not just sung but displayed on the screen, while wittily rhyming spoken word also features strongly. Music has played an important part in Lee’s film-making (including directing videos for the likes of Michael Jackson, Prince, Public Enemy and Eminem), and he knows how to make it have maximum impact here.

Teyonah Parris gives the foxy Lysistrata plenty of feisty attitude and the trigger-happy Chi-Raq (originally cast for Kanye West) is played with brooding anger by rapper Nick Cannon, while the eye-patch-wearing Wesley Snipes camps it up as Cyclops. Jennifer Hudson is moving as the bereaved mother and Angela Bassett lends a quiet authority as the politically aware, bookish neighbour. John Cusack, too, gives a barnstorming performance as the priest on a mission, while Samuel L. Jackson is an entertaining, nattily dressed one-man chorus who pops up occasionally to provide narration, commentary and social context.

Chi-Raq is showing as part of the BFI London Film Festival 2016 at Embankment Garden Cinema on 15 October at 17:30 and on 16 October at 12:00. Click here for more information.