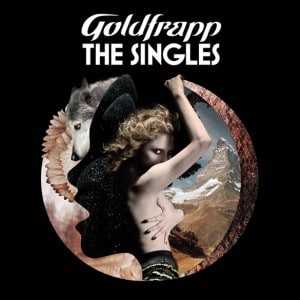 It’s been a long and varied career for Alison Goldfrapp and Will Gregory. Over the last 12 years and five albums, they’ve explored everything from spooky ambience (with their debut Felt Mountain), sexy grinding electro pop (on Black Cherry and Supernature), surprisingly pastoral folk (with Seventh Tree) and ‘we’re not really sure what this is, but it’s very ’80s’ (with their most recent Head First).

Now comes the inevitable obligation of a career retrospective. The Singles, as the name suggests, takes most (if not all) of Goldfrapp’s singles, mixes them up a bit, and then puts two unreleased tracks at the end just to tempt completists into parting with their money. And if there’s one thing it proves, it’s this: Goldfrapp are an exceptional singles band.

Whereas each of Goldfrapp’s albums occasionally had the odd filler track that stopped them from being gilt-edged classics, here we get all the meat and none of the fat. Even the fact that the tracks aren’t presented in chronological order doesn’t seem to matter – there’s so much pop sensibility crammed in here that each track sounds almost impossibly fresh.

The highlight though is, unsurprisingly, Goldfrapp’s commercial peak with the singles from Supernature and Black Cherry – Strict Machine and Ooh La La in particular sounding as sleazy, sexy and impossibly seductive as ever. They represent the perfect melding of Goldfrapp’s breathy vocals to Gregory’s impeccable arrangements, resulting in the kind of rare songs that sound utterly at home in both the bedroom and the nightclub.

It’s interesting, looking back now, to see how influential this era of Goldfrapp would become – even the unlikely figure of ex-S Club 7 pop poppet Rachel Stevens would adopt a similar sound a few years later for her commercial peak, singing oddly queasy songs about letting her lover into her “back door”. Yet only Alison Goldfrapp could imbue these tracks with the right amount of sleaze and power to carry them off beautifully. Plus, they were as catchy as hell – the choruses for Number One, Train and Ride A White Horse take up residence in your head and refuse to leave.

Elsewhere, the ambience of the Felt Mountain years still stands up incredibly well, with the atmospheric whistling motif of Lovely Head sounding both beguiling and strangely sinister, while Utopia (despite being released in 2000) sounds as weird and unsettling as it ever did, complete with Alison’s murmured chorus about a “fascist baby”. It’s a dramatic change from the S&M glam pop that would immediately follow, but it never sounds particularly jarring.

Away from the commercial peaks of Goldfrapp’s career, there are still the odd nuggets of beauty to be found. Rocket, from the Head First album (which, despite performing pretty disappointingly on a commercial level, still earned the band a Grammy nomination) is a beautifully upbeat disco number in the mould of Georgio Moroder, and A&E is a dark folky ballad which seems to tell the tale of an attempted suicide. As with most of Goldfrapp’s material, it’s dark but compelling.

The two new songs Yellow Halo and Melancholy Sky are, as is the way with these type of tracks, pleasant if unremarkable, both being stately, smooth electro pop. They’re nice enough, but ultimately only show up how strong Goldfrapp’s back catalogue is in comparison.

Goldfrapp are adamant that they’re not splitting up, and this just marks the end of one chapter. As they stand at that fork in the metaphorical road, this is a very good opportunity to remind yourself just how good a pop band Goldfrapp can be.