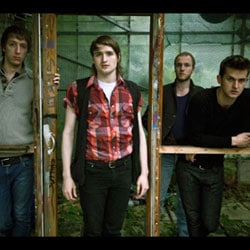 Sometimes the wrong stage can kill even the greatest band. More often than not, the wrong type of stage is of such gargantuan scale that its cavernous, black-curtained aperture and surrounding mechanical rigging are like the mouth and jaw of a beast ready to chew up a group of musical unfortunates and condemn them to a life of savings survivalism.

And yet, for every disaster, there are examples of bands unexpectedly hitting that Rock Heroism apex with absolute aplomb; Pulp‘s showstopping performance on Glastonbury’s Pyramid Stage and Elbow‘s victorious collaborations with both the BBC Philharmonic and Hall orchestras being among the most obvious and gratifying examples of recent times.

As the various members of Wild Beasts saunter off stage – a look of satisfaction, accomplishment and exhaustion written all over them – it’s pretty clear that this has been one of those rare occasions where the setting hasn’t fully served the hauteur of the band or the sense of occasion. And it’s not just the biased fans or hyperbolic writers in attendance that are reaching such conclusions. Lead singer Hayden Thorpe also has his sights fixed on far greater conquest. “We’d love to play the Manchester Apollo one day,” announces the coy man with the spectacular falsetto shriek, midway through the show. “This is just one step on the way.” Well, amen to that.

For tonight, an excitable Mancunian crowd has the good fortune to witness yet another richly-talented band from Up North; a band that has so far produced definitely one – and arguably two – albums that will outlive their creators’ current skyward trajectory. Thankfully, this isn’t another northern band made for northern cities. No band that projects with such camp, gallivanting flamboyance could ever thrust its chest out with any real sense of aggressive intention. Perfectly enunciated falsettos are about as welcome on the streets of Manchester as Liverpudlians, but this crowd isn’t here for rebel-rousing soundtracks to riots on prison roofs.

Ironically, Two Dancers isn’t short of a few anthems, but they’re the kind more suited to aristocratic creatures of the dark than the unemployed classes. The glorious opera of Hooting & Howling and the glossy art-funk of We’ve Still Got The Taste Dancing On Our Tongues have the boys bopping on their heels and the girls raising their arms and dancing to the shape of the drama.

Two Dancers’ success lies in its ability to flit from the haughty theatricality of, say, David Bowie or Queen to the more straight-laced, contemplative hues of Elbow and their precursors, Talk Talk. Of course, the very Guy Garvey-esque vocal talents of Tom Fleming help rather a lot in this particular regard and the Fleming-led title track and the slower The Empty Nest help to break up the night’s falsetto-festooned hysteria a little.

But what would a wild beast be without its howl? There can be no doubt that a special voice can separate the great from the good, and it’s the crackling sound of Hayden Thorpe that’ll ensure this feral quartet will always shy away from mainstream domestication. After such a triumphant night, stages like Manchester’s unremarkable, cube-shaped Academy 2 will surely be a thing of the past for this band of wolfish drama queens.